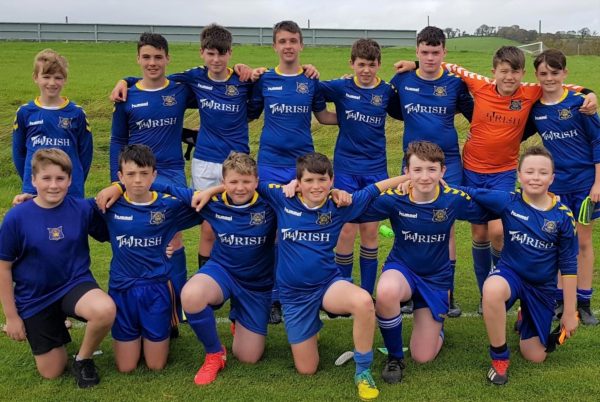 Carrigtwohill United A started their U14 division 5 campaign at home to local East cork rivals Churchvilla having played them several times the last 2 previous seasons and Churchvilla winning the last meeting.

The game was played in great spirit throughout the 70mins. Carrigtwohill started with some good possession and nice passing football which the lads have worked hard on since returning from the long break. Utilising both wings was the main objective today and getting the ball into the 2 strikers Adam and Daniel Mc

After 15 minutes or so, the pressure paid off and the Carrigtwohill winger Padraig scored a beauty with a looping strike from 18yards to beat a very good Churchvilla keeper.

The team are working on keeping their composure after taking the lead but it was Churchvilla who scored just before the break from a free kick.

The second half started with the visitors coming out stronger and Carrigtwohill had to ride out the storm for 10 minutes or so with Cillian, Luke, Callum, DanielC keeping them at bay, until Daniel Mc scored with a great run and neat finish into the bottom corner

Carrigtwohill kicked up another gear after bringing on fresh legs and sub George scored a beautiful goal showing good control, sidestep and strike into top corner to make it 3-1 with 10 minutes to play

Kevin was making good runs up and down the left wing and again Churchvilla came knocking but our keeper Paddy was off his line to close down any chance of a comeback.

One final long ball from Paddy, sent Daniel Mc on his run, he held off their defender and calmly slotted the ball over the oncoming keeper and inside the post to score his second of the day and put his team 4-1 up before the final whistle.

Man of the match went to Luke who kept the defence intact all afternoon. Well done to all coaches and parents.

Player of the Match: Luke O’Sullivan