17th May at Ardrath Park

Carrigtwohill shot back to the top of the league in style when they prevailed against a stubborn Youghal side that took an early lead in the first 15 minutes. Carrigtwohill set up their team cautiously with a defensive approach of a 3-1-3-1 formation. That didn’t work well as some attack minded players struggled to win possession in midfield to feed Rollie, who was the lone striker on the day. Youghal struck with a well worked goal midway through first half.

Sensing defeat, the visitors quickly reverted to 3-3-2 where they immediately got back into the game. Rollie got on the end of a looping pass before forcing a save that wasn’t dealt with well by Youghal defenders. A poor clearance gave him another chance to push it into Leroy’s way who finished well with a left foot strike.

Moments later, Ethan and Leslie exchanged passes to find Leroy who took a precise strike that hit the upright from distance before going in to go 2-1 up.

Youghal huffed and puffed and looked dangerous on attack and Colm and Jayden had Sebastian in goals to thank when the two Youghal front men terrorized their defence time and again.

The third goal for Carrigtwohill came at the right time when Leslie took a run on the left, played a one two with Rollie before finding Ethan at far post who calmly beat the keeper to go 3-1 up. 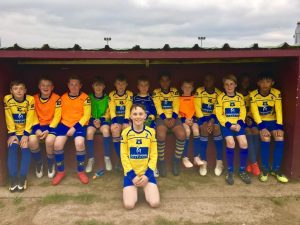 In the second half, the emphasis was put on keeping a clean sheet and hopefully scoring a few more. That’s exactly what they achieved as they dominated midfield. Leslie and Dennis combined well on the left to keep Youghal quiet. Once or twice Alex O’Sullivan had to be at his best coming to the rescue of Colm and Jayden as Youghal threatened to get back into the game with some tricky fast forwards. The fourth goal came when Amany sent through pass for Leroy who found the pace down the flank to beat the outdrawn keeper from distance.

As confidence grew Leroy got his fourth of the day when he combined well with Rollie to take a shot the keeper failed to deal with. It must be mentioned that substitutes, Cian O’Rourke and Noah O’Neill did well to create even more chances on a day where Carrigtwohill had the bulk of the second half which allowed them experiment with positions without upsetting the balance of the team.

This was once again a game that all the kids grew in strength as game progressed leaving coaches with headache as to who could be picked as Man of the Match. Amany, Alex O’Sullivan and Sebastian in goals were strong contenders, but on a day they had to come from behind, MOTM deservedly went to Leroy who terrorized Youghal with pace and dribbling that eventually got rewarded with four goals.