It was a long hard season but one that would bring success in the league and two superb Cup runs.
It seems like a distant memory now but in the League Cup, they convincingly beat two Premier division teams to reach the semi-final only to be beaten by Douglas Hall.
Getting to the semi-final in itself was a great achievement but this only spurred the lads on. In the FAI Youth Cup, they proceeded outside Cork county to the last 16 only to be defeated by Kilfrush from Limerick 2-1.
The team had 3 representatives on the Cork Youth Academy – Shane Waters, Robin Ward and Mark Daly. Robin went on the win the FAI Inter League Trophy with the Cork Youth League team
However, a league title was always the overall aim for this group and after 3 seasons of near misses, the Carrigtwohill Under-18’s started the season with aspirations of winning the league.
They started with a 3-1 win over Macroom with a goal coming from David Rooney and a brace from David Ryan, but a tired display against Leeds with a depleted squad saw them suffer only one of two league losses, 3-2 away to Leeds.
An away trip to Crosshaven was next and the lads bounced back well, Robin Ward with 4 that day and Tristan Horgan with the other in a 5-2 win. The goals kept coming as they went on to beat Macroom again, a 6-1 victory on this occasion with Kevin Cody, Evan Rowlands, Mark Daly and Shane Waters all on the scoresheet as well as another 2 from Robin Ward. They followed that result up with revenge over Leeds by winning 4-0, Robin Ward scoring 3 and David Ryan the other.
Next up, it was a 2-1 win over Crosshaven in one of the most one sided 2-1 wins you will ever see with Mark Daly and Tristan Horgan on the scoresheet that day.
A home match against Springfield was to prove pivotal and a massive result in the grand scheme of the season. Down 2-0 at half time, Carrigtwohill rallied to win 3-2. They were kept in the game for long periods by Man of the Match, goalkeeper Alan Warren. The goals came in the second half from Robin, Shane Waters and Griffin Hurley. Honourable mention that day goes to Sean Crowley whose fantastic work at right full set up Shane Waters’ goal, which was scored at a crucial point of the game.
It was Bandon’s turn to come to Ballyadam Park and yet again the lads were slow to start. Three goals down within 30 minutes and were it not for keeper Alan Warren it would have been a lot worse. Not for the first time, the Carrigtwohill lads rallied to regain parity and with 15 mins to go it was 3-3. However, in their quest for all three points, Carrigtwohill pushed forward and left gaps at the back. Bandon took advantage and scored the winning goal. Goals on the day coming from Tristan Horgan, Shane O Hanlon and Kevin Cody. In hindsight, a little more caution would have secured the draw, but this was to be the last time they tasted defeat this season.
A little gap between fixtures only made the lads hungrier for the next win. They beat local rivals Corkbeg 2-1 with Robin Ward getting his scoring boots back on against his old club. However, it was the performance from Jack Scully will be remembered for a long time – not giving the Corkbeg strikers a sniff for 90 minutes.
Then it was then a do or die fixture away to Bandon. A loss in that game would have essentially handed the title to Bandon, but with a plan in place that was executed to perfection, Carrigtwohill defeated Bandon 3-1, with goals on the day coming from Shane Waters, Kevin Cody and David Ryan. Best on that day were Griffin Hurley and David Rooney but in truth it was a fantastic display from all 13 lads that played.
It was now the month of May and the business end of the season with Corkbeg next up. Because of results in other games, and their win against Bandon, the lads knew a victory would seal the title. During a nervy opening 45 minutes both teams had chances with the Corkbeg keeper making a number of important saves to keep them in the game.
The second half was a different game completely, which was a common theme this year. Goals from a fit again Robin Ward, a screamer from 30 yards from Kevin Cody and a lovely volley from centre half Shane O’Hanlon sealed the victory and the clubs first ever silverware in the Youth League. The season finished with a 2-2 draw against Springfield, goals on the day from Daniel Fawsitt and a wonder strike from Mark Daly.
Carrigtwohill finished on 28 points, with 9 wins, 2 losses and 1 draw, scoring 38 goals and only conceding 18 in a very tight league. For this group, it was just rewards for the effort and commitment they showed not only this year but also over the last number of years together. Now the hope is that the vast majority of these lads will move to the adult side of the club to help develop their talents and try and win more silverware for the club.
Congratulations to the entire squad and management team of John O’Sullivan, Jason Waters, Kevin O’Sullivan and Jack Dineen on their achievements this season. 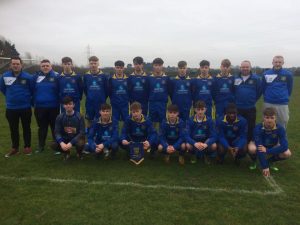 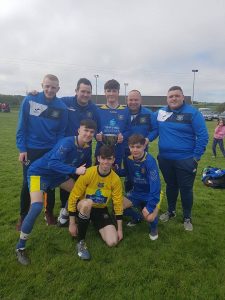