Youghal and Carrigtwohill used to play regularly in this age group and had some memorable encounters at U12 and U13. But then Youghal’s fortunes changed when they were promoted to Division One 2 years ago and the 2 teams went their separate ways. This season, however, has brought these 2 groups of players back together and today’s visit to Ardrath Park had a bit of a family reunion feel to it.

Youghal of course, were a bit of an unknown from a soccer viewpoint, having been relegated back into Division 2, due to the shrinkage of their squad midway through the previous season. Back to full strength however, they are essentially a Division One team and it showed on the day.

From the start, it was Carrigtwohill who took the lead, literally in the first minute when a long through ball evaded everyone including the Youghal keeper. This might have raised hope an easier morning, but these initial thoughts did not last as Youghal’s wingers showed the kind of pace they had and put Carrigtwohill on the back foot for the rest of the first half, helped in some measure by a strong wind. 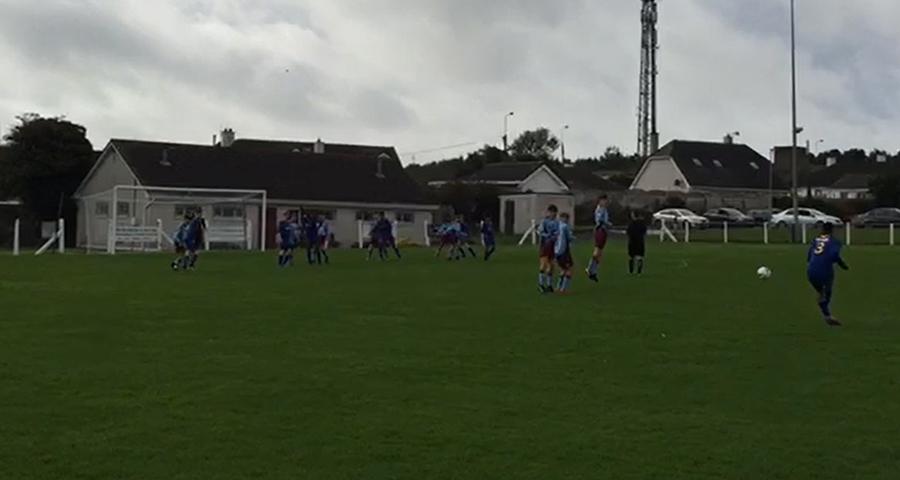 Carrigtwohill’s back four did well, but the two full backs were under pressure run after run and Youghal scored 4 goals from resulting crosses to make it 4 – 1 at the break. On the other hand, Carrigtwohill were competing well in the play, particularly in midfield where the recent work in training is clearly paying off.

Towards the end of the half, Carrigtwohill’s goal keeper produced the save of the season when he pushed a ferocious drive onto his crossbar with a one handed fingertip save at full stretch. This drew applause from both side of the pitch!

Wind in the back, Carrigtwohill took a more offensive stance and put pressure on Youghal. It was not long before Marvin Ansah turned a cross from the right past Youghal’s keeper, only to see his effort saved off the line by a retreating defender. It was only a matter of time however as Carrigtwohill were playing better and better and Evan Donnelly got to the ball first when Adbul Rahim crossed to reduce the score to 4 – 2.

In games like this, you need a bit of luck and it did not smile on Carrigtwohill. The score remained 4-2 despite all their best efforts over a 30 minute period where they had the better of the play by some margin. In the end, as Carrigtwohill’s players ran out of steam, Youghal found gaps in the defence and scored two quick goals to put a distance between them and their visitors that did not reflect the intensity of the competition in this game.

So a bad result, but at times a good performance from an improving team. This is after all only the second game of the season and the two matches played have been against strong opposition. On the day and with their squad at full strength, Youghal were stronger than Carrigtwohill but let’s see what happens in 3 months’ time in Ballyadam Park, when Youghal come to visit!

Player of the Match; Sean DeBurca