On a bitterly cold Bank holiday Monday, the Carrigtwohill Under-16’s made the difficult early morning trip to Innishannon.

Innishvilla narrowly missed out on winning the league on the last day of the previous season and were currently lying in third having beaten Carrigtwohill already earlier in the season. To make matters more daunting, Carrigtwohill were without both regular center backs which resulted in wholesale changes to the back line. In truth, both sides found the opening 20 minutes difficult, perhaps a consequence of the extreme cold with half chances being created at both ends. The match sparked to life when Innishvilla grabbed their first, a determined run by their midfielder who rode two challenges to find enough space to finish from the edge of the box. They grabbed a second when a superb through ball found the striker behind our back line with a simple finish to make it 2-0 at half-time. It was a difficult half-time – frustration with not performing well and limited options to make changes – but players did realize the gravity and importance of the fixture.

Carrigtwohill were a different proposition in the second half. Rob Adam moved to midfield and Ben Kearney coming on up front providing energy and application which unsettled the Innishvilla. Carrigtwohill were now pressing with urgency and pulling the Innishvilla defence wide with good work from Darragh Hoare and Anesh Swani. This pressure brought reward in the when shortly after hitting the cross bar, they won a penalty from a corner when Ronan Ymedi was tripped in the process of shooting. Cool as you like, up steps Evan Donnelly to make is 2-1 and it was game on it the 50th minute – game on ! 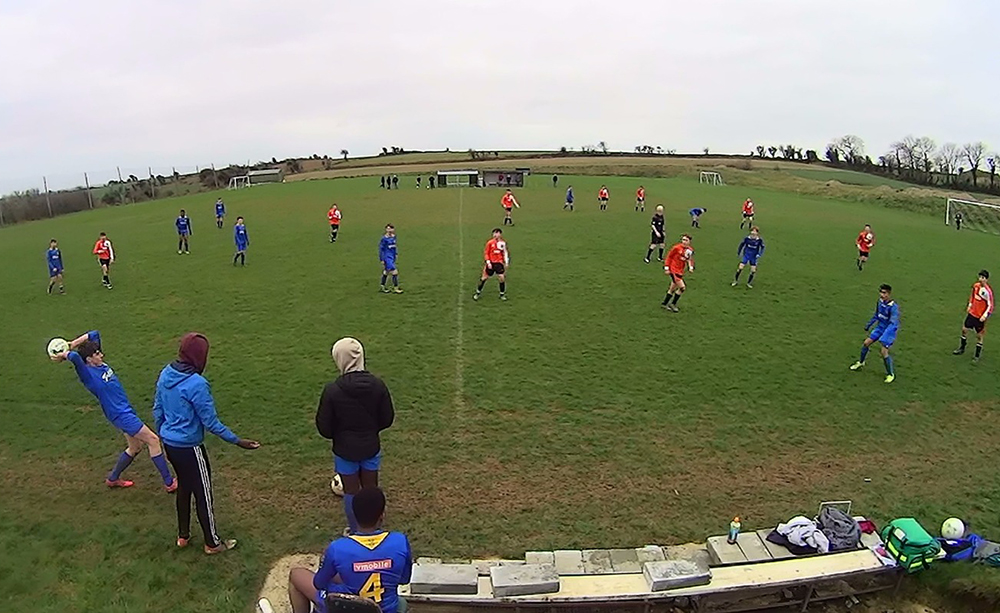 With the away side making all the running now, Innishvilla were under immense pressure. With some good play from James Barry, Darragh Hoare found some space to make a penetrating run down the left side and find Ben who took the ball in his stride, waited and gently lifted the ball over the on-rushing keeper to tie the match. The atmosphere on the pitch (and sideline) was electric now with Carrigtwohill having come back from the dead to tie the match but there was more to come.

Innishvilla took the tip-off in the centre circle back to their centre back who played a forward pass through midfield. The ball was superbly intercepted by Robert Adam who took it at full stride and pushed forward. As he approached the edge of the penalty box, he unleashed a screamer of a shot to rifle the ball into the top corner of the net beyond the despairing dive of the keeper. From their own tip-off, Innishvilla got only two touches with both second and third goals being scored in the same minute !!

This Carrigtwohill team has often been on the receiving end of such twists and with 25 minutes to go, there was plenty more soccer to play and mostly this was to belong to Innishvilla. With only James O’Shaugnessy playing in position, centre back Ronan coming off with an injury and Innishvilla now camped in the Carrigtwohill half it was hard to envisage the away side holding out for a win. Sterling work by Adam O’Leary, who has excelled over the past couple of matches, Alex Canty who came in to shore up the defence and James Barry operating as a defensive midfielder was holding the ship steady. All 11 players put their heart into the match, with repeated blocks, tackles and interceptions.

There were several close calls, with Anesh heading off the line from a corner and Darren making a super double save from close range but this was really a team effort. For all the superb performances, it was Ebe Imoh who stood above them all. He dominated the aerial battles, tough in his tackles, strong in his clearances and led his teammates by his example. With selection issues at centre back, Ebe was the go-to man and really put himself on the line for his team.

This was not Carrigtwohill’s most stylish or convincing win, but by far their most impressive as it is difficult to express the difficulty of the task they faced in getting back into the game and holding onto the result – all in artic conditions against very fancied opponents.

Player of the Match; Ebe Imoh