The Carrigtwohill Under-16’s finished off their season with a home match against Greenwood. Both teams had contested the reverse fixture just 6 days beforehand which was a very entertaining draw in Togher.

The league normally finishes at the start of May and this June Bank Holiday fixture was causing difficulties for both teams as neither had substitutes on the day. It was the home side who made all the running at the beginning of the match. Ebe Imoh, playing in midfield was winning a lot of ball and a constant threat. Then, a super cross by Evan Donnelly was inches too high for Anesh coming in on the back post – it did seem the opening goal would come soon. However, it was Greenwood who would strike first with a long range speculative shot from outside the box crept in just under the crossbar. 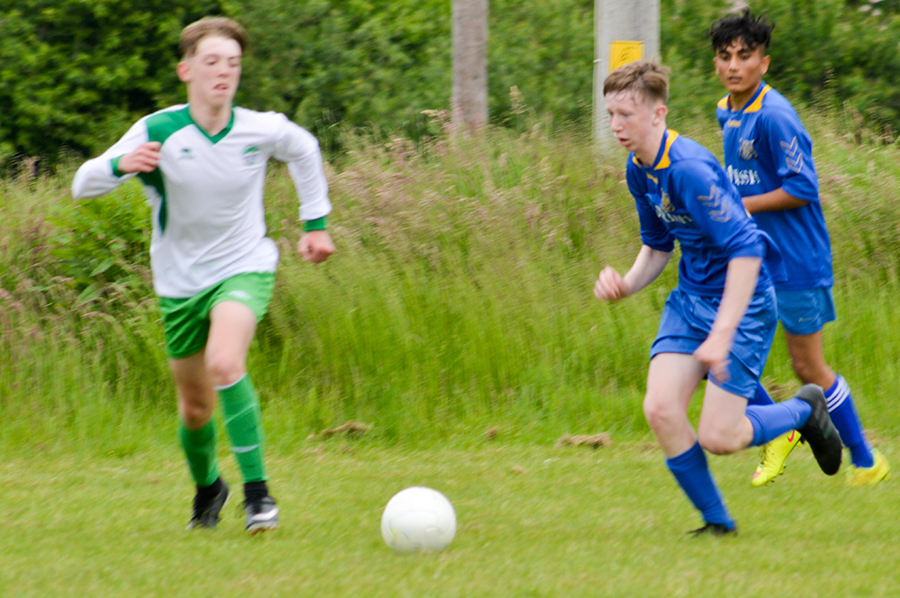 The second half would follow a similar pattern, with Carrigtwohill having more territory and Greenwood hitting them on the break. James Barry in midfield was fielding a lot of ball both on the ground and in the air, Anesh and James O’Shaugnessy were working well on the right side and Evan, now up front was pushing to create clear openings. Greenwood for their part were very solid in defence, with a no-nonsense approach and when they broke they did so with speed. Pushing for the equaliser, Carrigtwohill pushed players up for a corner but it was the visitors who cleared the ball and caught them on the break. They scored a well worked goal with good passing at speed with a neat finish from inside the box. They now found themselves in a frustrating situation at half-time, but the lads never gave in and pushed forward again from the restart. They got their just reward when Sean deBurca scored with a header from an Ebe Imoh cross.

Carrigtwohill pushed for the final 10 minutes but Greenwood were solid and in no mood to give up the 2 points. The match brought the curtain down on Carrigtwohill’s season, one which was full of up’s and down’s. Overall, they can look back on a good season, although they will be disappointed with their final league position. Playing in Division 2 is not easy, as the standard is quite high, and they were very competitive this season – looking back they would feel that they were close but not quite there especially in the single goal defeats – much like today’s match against Greenwood.

The highlight of the seasons must have been their good run in the National Cup and definitely the most dramatic moments were during the 8-7 sudden death penalty shoot-out loss in the Local Cup.

The squad can look back on the season with good memories, as they leave schoolboy soccer and go ahead into the Cork Youth League.

Player of the Match; Alex Canty