Under-15 Local Cup at Ballyadam

Carrigtwohill Under-15A welcomed division 5 side Riverstown B to Ballyadam for a Local Cup clash. Both teams played in same division last season but were now separated by Carrigtwohill’s promotion to Div 4 this season.

It was a blustery day but thankfully the rain stayed away. Just 3min into the game, a dipping cross come shot from Kevin dropped inches wide of the post and a couple minutes later, a great shot from the edge of the box from Riverstown was matched by Cillians fingertips pushing it onto the bar.

On 8 minutes, a handball by Riverstown in the box went unpunished with no penalty awarded.

After 11 minutes, a handball by Brian on the edge of the Carrigtwohill box saw him awarded the first yellow card and the game was scrappy up to the break with no real chances for either team.

Into the second half and 41 minutes in, a foul on Brian on the halfway line gives Daniel C a chance to land it into the box but a wind assisted clean strike saw the ball bounce in the area over the oncoming keeper to give the home side the opening goal. 1-0 to Carrig.

There were some bookings in the second half for Jakub, Kevin and Daniel Mac who got his second for an innocuous tackle on a Riverstown player.

In the 70th minute, with the game almost won, Riverstown broke down the left and a fine shot dipped over a diving Cillian.

So, into extra time and after just 5 minutes, a speculative shot from the edge of the area looped over Cillian to give Riverstown the lead. The home side then lost Rory to a tough tackle and now, the 9 Carrigtwohill lads are up against it.

However, in the dying minutes of the second half of extra time, a free from Kevin is saved by the Riverstown keeper but Brian was sharp to follow up and smash it home.

Brian limped off with a knee injury shortly after the goal, so Carrigtwohill were now down to 8 players and the final whistle blew and it would now take penalties to decide this cup game.

A sizeable crowd moved to the grassy knoll near the goal where the penalties would be taken.

Riverstown won the toss and elected to go first. Each penalty by both teams were scored up to Riverstown’s 8th which was brilliantly saved by Cillian our keeper who had just previously scored his own penalty.

Up stepped Adam and superbly struck the ball home into the bottom corner igniting fireworks among the players, coaches and parents.

Heroes and warriors won the day at the Battle in Ballyadam!

These are a special group of young men

Player of the Match:- All 11 players 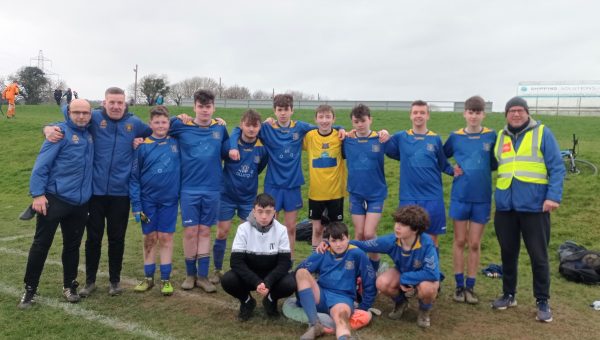