Under-14 Division 2 League at Ballyadam

A must-win game, brought the excitement that comes with a decisive game. Carrigtwohill struggled to play their usual passing game in the early stages of the game as the nerves caught up with the starting line-up and the first 15 minutes finished with nothing much to talk about.

Coming back from water break with a little bit of digging in deeper Rian Thornhill received a slide through from Leroy before he picked Rollie with a beautiful pass. Rollie drew the defender before beating the keeper with a low shot to go 1 up.

It didn’t take long before Carrigtwohill settled on to their game and found in routes into Innishvilla. Another through ball from midfield found Rollie in the left-sided attack. He duly rounded of both defender and keeper to slot in his second before going into the halftime break.

The second half came with a supercharged Innishvilla performance where Jayden and Edras were kept busy with a marauding front 2. It was a game where the pressure and cover sequence between Edras left-back and Jayden’s left side needed to be spot on and they duly did that. Any moment the two got beaten, captain Colm was once again at the top of his game playing a sweeper’s role.

As has been in recent games, Carrigtwohill got punished from the corner kick as the impressive Adam Lee stand-in keeper from U13s  struggled to hang on to a high ball before the Innishvlla striker tucked in behind. Sensing danger talisman Rollie Durango once again collected a long ball in the right-sided channel where he rounded a couple of defenders before sending in a precise cross where Leroy outjumped his marker to head it past the keeper.

Innishvilla didn’t give up as they once again lobbed the ball from a free-kick past Adam Lee in goals for Carrigtwohill. The home side, sensing an imminent comeback from their opponents knew exactly what they had to do.

Firstly it was Ethan with a disallowed goal from a free kick and secondly, it was Colm with another disallowed goal from another  free kick. That didn’t discourage Rollie who was a thorn in the Innishvilla defence as he once again collected a long ball from Ethan, which  was headed on by Leroy. Rollie pounced on and wiggled past defenders and keeper before being brought down for a penalty. Up stepped Alex Lombard who beautifully finished it to go 4 up.

It was a game we needed to be sharp at the back to keep the scoreline intact. Edras and Jayden had an inspired partnership where Edras was first to everything and anytime he got beat Jayden was quick to clean up with Captain Colm doing his usual tidy up for any possible mistake. As fatigue crept in Innishvilla found in routes through the midfield before once again the young goalkeeper was beaten with a looping shot to have a nervous end to a tightly contested 4-3 win for Carrigtwohill United .

Man of the match deservedly went to 3 players who were on top of their game. Jayden and Edras had a dream combination in defence, whilst Rollie Durango did all the damage to a spirited Innishvilla with 2 goals and 2 assists 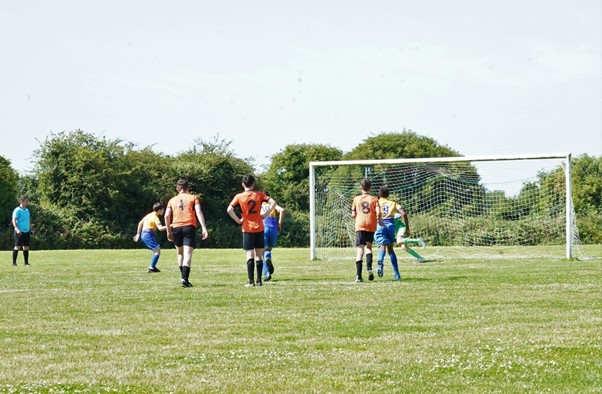 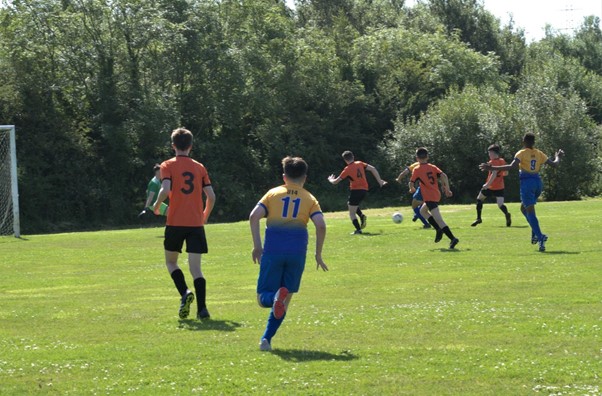 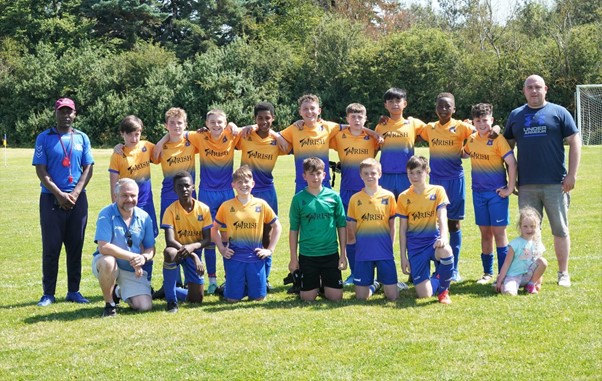