On a beautiful clear spring day it was a battle of the top two in the Girls U13 Division 3 fixture with Kanturk having played one more game than Carrigtwohill and top of the table by one point.

In goal for the home side was Claire Crowley, full backs Alex O’Flynn and Megan Walker and the centre back pairing was Caitlyn Egan and Niamh Cuddigan. Anchoring midfield was Maedhbh Carroll ably assisted by Anna  Madden. On the wings were Sarah Cronin and Sophia Redmond. Up front were Lilly O’Connell and Amelia Sheehan.

Carrigtwohill started slowly and dominated possession and territory but were finding it hard to penetrate a very big and strong Kanturk defence. Slowly but surely Carrigtwohill began to find their rhythm and it was only a matter of time before the deadlock was broken.

Amelia and Lilly were causing the Kanturk rearguard all sorts of problems and on the wings Sarah and Sophia were seeing lots of ball.

Carrigtwohill had a few efforts go narrowly wide and the Kanturk keeper made some good saves before Lily opened the scoring with a superb goal on the 14th minute. Not to be outdone by her strike partner Amelia added her name to the score sheet three minutes later. Then on the 23rd minute Sophia got on the scoresheet. At this stage Kanturk were under incessant pressure and on the 26th minute Carrigtwohill were awarded a freekick outside the area which was expertly dispatched by Sophia to the top left hand corner. Two minutes later Sophia completed her hattrick.

Carrigtwohill used the five goal cushion to make a whole host of substitutions with Karla, Juliet & Laura all getting on the field.

The second half saw Carrigtwohill maintain control of the game although Kanturk did get a few shots off which were comfortably dealt with by Claire Crowley in goal. Carrigtwohill introduced Brooke, Ellen, Majka and Megan Kavanagh in the second half and all substitutes saw lots of time on the ball. Midway through the second half Karla Edwards had a superb effort drift just wide of the post. Had it gone in it would have been match of the day material.

Sophia Redmond won player of the game but this win was all about TEAM.

Thanks again to Andrew, Aidan and Declan for having the facilities in Ballyadam in tip top condition.

Carrigtwohill Under-13 girls started out training on the last Tuesday in August 2021. They are now top of the league. They believe and they never stop trying. 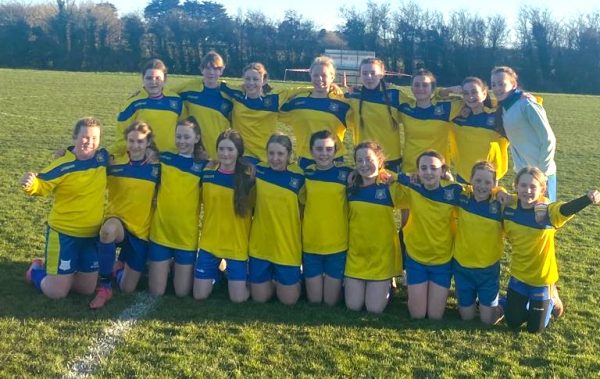