The Carrigtwohill United Under-12A team had their first league game at home to Leeds A on Monday evening. This was the boys first competitive game and they really put in a great performance.

The game started with some nice passing from both sides but it was Carrigtwohill who broke the deadlock on 11 minutes. It was a fantastic team goal which started from a goal kick where Divine and Elijah combined brilliantly to set up a chance which the Leeds keeper saved superbly but Adam McCarthy was on hand to finish the move. Adam proved to be a threat all half, getting great support from Martin and Charlie in midfield.

2 mins into the second half Leeds equalized through a great effort from the edge of the box. This didn’t unsettle the lads and the back 3 were really solid and Ben in goal made some great saves.

They kept pushing for a goal and had the chance through a penalty on 42 mins but the Leeds keeper made a great save.

Not to be put off Carrigtwohill got the goal they deserved, a thunderous effort from Martin straight into the top corner.

Every player on the panel today were great, superb effort and commitment but the player of the match has to be Martin with a great midfield display.

Player of the Match: Martin Lehane 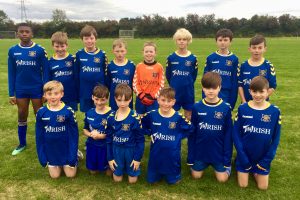