Under-12 Conboye Cup at Ballyadam

Carrrigtwohill progressed to the last 16 of the Founders Cup on Thursday night after their recent first-round win away in Kinsale.

The home side started strongly, great pace from midfield and upfront leading to a wave of early attacks. The deadlock was broken by Aaron on 11 minutes, a cracking strike into the top left hand corner of the goal, unsavable! On 13 minutes, some more pressure led to a perfectly delivered corner kick from Isaac to the back post where Sam was waiting to cushion a powerful header into the left-hand side of the goal. 2-0.

A nice piece of work on the left wing and cross by Sam led to Aaron skilfully slotting home his second of the evening, on 15 minutes.

So a terrific first 15 minutes by the boys – moving the ball at speed, and persistent running at the defence. Springfield pulled a goal back from a free kick on 25 minutes to make it 3-1 at the break.

At the start of the second half Carrigtwohill came out all attacking and created some early goal-scoring opportunities. On 39 minutes, a lovely piece of skill in the centre of the pitch by Isaac followed by a rather wonderful outside-of-the-foot pass, set Aaron Power free – Aaron duly completed his hat trick with a lovely finish after going around the keeper. Lovely goal.

On 49 mins, Aaron went round the defence towards the touch line and crossed to the back post where Ryan got his third headed goal of the season! 5-1.

On 52 minutes, a one-two between Ryan and Jack on the left side, led to Jack playing a lovely cross to the back post and a wonderful volley to the left hand side of the net by Owen. That goal perfectly closed out the scoring on the night. Another lovely team goal, completed by an exquisite finish.

Our Man of the Match on the night was Aaron, for his goals sure but more so for his hard work and constant pressing of defenders throughout the match. Well done Aaron.

On the night Aaron and Owen had great support from Isaac, Oisin, Ryan, Michael, Sam and Fionn. Defenders Patrick, Odhran, Cian and Jack were solid though out while Bart’s distribution was excellent again, he made a couple of important saves as well during the game.

Player of the Match: Aaron Power 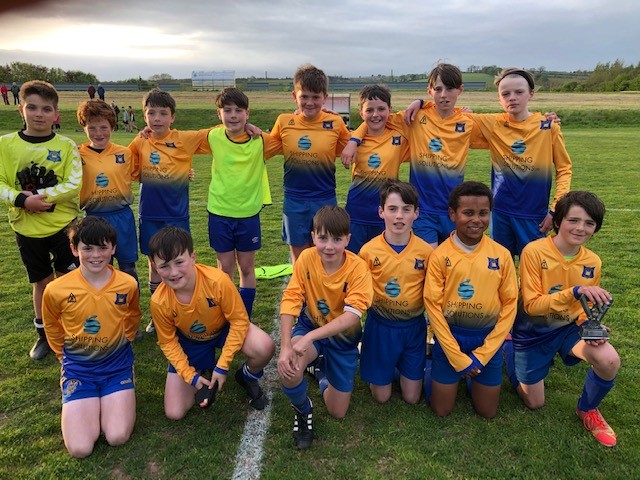