With no fixtures last Sunday due to the FAI Cup Final, Carrigtwohill United Under-12’s had 2 weeks and 3 training sessions to prepare for the visit of Riverstown to Ballyadam. This time was well spent and after a review of how our season was going a few adjustments were made to formation and system of play.

The boys had worked really well over the training sessions and felt confident going into this clash. Right from the offset Carrigtwohill would put the Riverstown defence under pressure and Tom, Rian and Cillian all came close. The home side also had a couple of penalties shouts turned down. Team shape was really good both in defence and midfield and Riverstown found it very difficult to break through the lines.

Although playing some super football from midfield to attack and with a number of good chances being created the home side would go in at half time being held goalless.

The second half began with Carrigtwohill piling on the pressure again and following a succession of corners any slight touch would have taken the ball over the line on three separate occasions as the visitors started to buckle.

The scoring was opened on 38 minutes when a poor kick out by the Riverstown keeper was returned with interest by Rian Thornhill and the ball nestled in the bottom corner. Carrigtwohill really had their tails up now and 10 minutes later doubled their lead when Rian and Cillian combined well, Cillian with the finish this time.

The game was put to bed 4 minutes from time when Cillian grabbed his 2nd and Carrigtwohill’s 3rd. It cannot be stressed enough how impressive this performance was and man of the match award has numerous contenders but is shared between Adam Lee for his clean sheet and excellent distribution and Tom Walsh for his industrious running and creative ball play, well done to all involved. 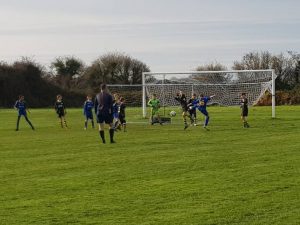