On the Bank Holiday Sunday, Carrigtwohill United Under-12’s travelled to Carrig Park in Fermoy to take on the division 1 leaders. Unbeaten in the league, with 5 wins and a draw, the North Cork outfit would provide a stern test for Carrigtwohill.

The home side were straight out of the blocks and took the lead in 2nd minute with a fine strike from their no 9.

Carrigtwohill competed ably for the 1st half but a lot of the play was centred around the middle of the park with both sides battling for possession. Going forward chances were limited for the visitors and set plays looked like their best hope of an equaliser with Sean Og going close from a long range free kick.

The second half mirrored the first, again Fermoy scoring early when their no 10 meandered through the Carrigtwohill defence and unleashed an unstoppable drive to beat Adam Lee in goal. Carrigtwohill rallied and threatened again through a free kick which Roan O Keeffe crashed off the Fermoy wall. Searching for a way back into the game Morgan Foley did well on the right wing but clear cut chances were few and far between and Cillian and Kyle were denied the supply they needed.

Fermoy would seal the victory with 15 minutes to go with their No 10 doing the damage again. Great praise must be given to the 12 boys who all played their part and battled till the end led by captain Tom Walsh. Well done all. 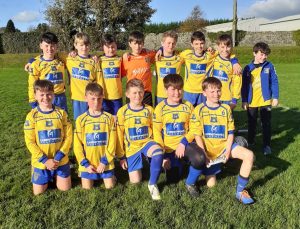