Carrigaline Hibernians have been a great opposition for Carrigtwohill over the last 2 years and the first match this season delivered a very competitive 1 all draw back in September in Ballyadam, so there was great expectation with this fixture. The conditions were good enough but the breeze was strong and persistent and there was a bit of guile involved in deciding which way to play first. The pitch was also very heavy and Carrig having only one sub, tiredness could be an issue.

Having won the toss, Carrig elected to play with the wind in the first half to try to get ahead and control the game in the second half. Of course, it did not work as, despite great attacking play at both ends, the score was still nil all at half time. There was good news however as Carrig’s U12s were delivering a very competent performance: good passing, good physical presence and great spirit. All 10 players were superb: in particular, Daniel Murnane and Cormac Murphy were controlling midfield, blocking and tackling with composure and Kyle Graham was showing how to play in the centre back position, acting as sweeper whenever Carrig got in trouble. Hibernians showed great composure, managing to kick out safely despite the strong breeze and there was a worry that Carrig would come under great pressure in the second half. 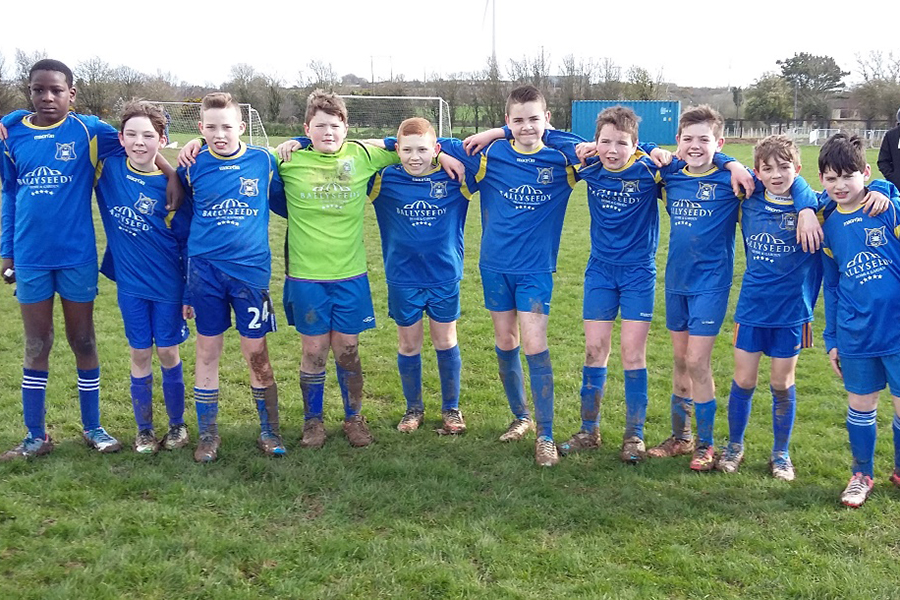 The pressure did come on, but actually, Carrig played even better in the second half, against the wind. Incredibly then, the ball drifted right in Hibernians’ half and Ruairi Adam who was playing striker ran onto it and rounded the full back, shoulder to shoulder, as he was bearing down towards goals. From 15 yards out, he drove a hard shot which beat the Hibernians’ goal keeper at his near post. The game changed progressively from this point on with Hibernians pushing really hard in search of an equaliser and they got it with about 15 minutes to go: a great run on the left by Hibernians’ most lively player leading to an unstoppable shot across goals into the far corner of the net.

Carrig were still dangerous on the break and could have gone ahead again but play was more often at the Carrig end of the pitch. Ryan Wolfe delivered a strong shot, but the Hibernian keeper was excellent and turned the ball out for a corner. An unlucky ball-to-hand incident then led to a penalty for Hibs, and the game seemed about to turn. However, Darragh Higgins, playing a blinder in goals all morning, completed his collection of fine saves with one more, diving at full stretch on his right to deny the Hibernian striker! Within minutes, Hibernians were dangerous again and Darragh saved at his near post only for the ball to ricochet onto one of Hibernians’ striker. Fortunately for Carrig, Ruairi had chased back from the striker position and blocked twice on the line to keep it at 1 all.

There was time for another last few scares at both ends before the contest came to an end, with players, coaches and parents delighted with the quality of the morning’s action. Two games, two draws, for the two teams that are level on points in the middle of the Div 2 league table!

Player of the Match – Ruairi Adam