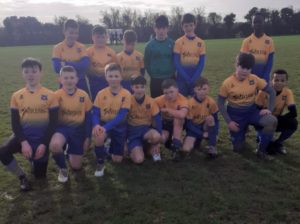 On Sunday morning, Carrigtwohill United Under-12’s entertained Bandon AFC in a League Division 1 clash at Ballyadam Park. Having been narrowly beaten on penalties in the Local Cup earlier in the season, the boys were well up for this one also knowing a win would see them leapfrog Bandon into 4th place.

The home side started brightly and were first to every ball and dominated the opening 10 minutes. In fact, they were unlucky not to find themselves ahead as Rian forced a superb save from the Bandon keeper with a rasping drive that was destined for the top corner. They would twice be denied by some dubious decisions as Tom Walsh had a perfectly good goal disallowed for offside and Cillian was clearly tripped up in the opposition box when through on goal but no penalty given.

With the home side making all the running Bandon were forced to play on the counter attack and it was from such an attack that the opening goal came. A long ball over the top for their pacy No 9 to chase, who duly won the race and finished past Adam Lee in goal on 23 minutes. The 1st half would see no more goals and Carrigtwohill went in at the break a goal behind against the run of play.

Bandon pinched a second goal soon after the restart and Carrigtwohill heads could have dropped but the introduction of Noah Eddins and Morgan Foley brought renewed energy to the side on what was a heavy pitch at this stage. The next move was straight off the training ground when a slide rule pass from captain Osas Aghedo split the centre and full back to find the movement of Cillian Rooney who fired in a wicked cross for Noah Eddins to meet. Noah had timed his run to perfection and crashed a thunderous volley into the roof of the net from 10 yards.

Game on again and the impetus was now back with the home side. Cathal Seymour was introduced to shackle the Bandon No 9, and so were Jarlath and Noah N to reinforce the defence and midfield respectively as Carrigtwohill pushed for an equaliser in the final 15 minutes. Noah Eddins had another volley flash wide late on and Bandon had to defend deep to keep the Carrigtwohill attackers at bay as they kept going and going.

With only a few minutes left on clock Bandon would seal the victory and 3 points when they were awarded a penalty (again questionable) and duly converted. Final score 3-1 to the visitors but both sides must be congratulated on producing a fantastic game of football in testing conditions. Well done all.

Man of the match is shared by Rian Thornhill,  with some impressive link up play and was always a goal threat and Mr. dependable Tom Walsh. 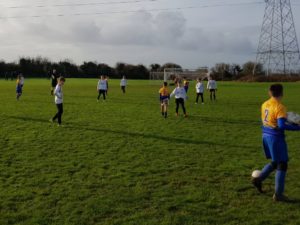 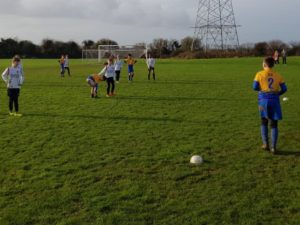 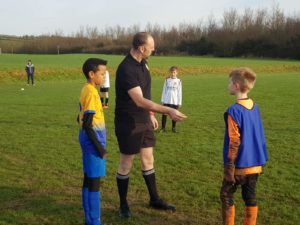