An invitation came to us to play in the Dennis Cambridge Cup in memory of a past club chairman for Leeside FC. We hastily put together a squad of 11 players that played four games including final.

Our first game was against Glounthaune were we started slowly in a 3-3-2 formation. We kept our shape at the back but too drawn back into our own half where Jayden, Leo and Dennis looked solid for most times. Leroy, Amany and Brian completed our midfield three that looked a bit shaky and unfamiliar to each other. Upfront we had Cian O’Rourke and Sebastian running the channels. We kept a clean sheet in first half before finding a break through second half from a good strike by Dennis. Rollie came late at the right time to stabilize the game soon after Glouthaune equalised. Match ended all square.

Our second game was against Corkbeg. We had our familiar strong set up midfield of Rolie, Amany and Dennis dominating the midfield with slick passing game. At the back Leo playing alongside Leroy and Jayden proved hard to breakdown despite occasional threat from Corkbeg’s skillful wingers. Never saw a low scoring game where at one stage we hit woodwork four times successively from 3 different players which looked more like the lads where having a crossbar challenge than genuinely trying to score. Somehow the frightening pace of Sebastian left few defenders trailing behind when he successfully notched that solitary goal to win us the match. Highlight of that match  came from an end to end run on the right wing by Leroy, before crossing the ball onto Brian Healy’s head who narrowly missed the goal with a good connection on the head. 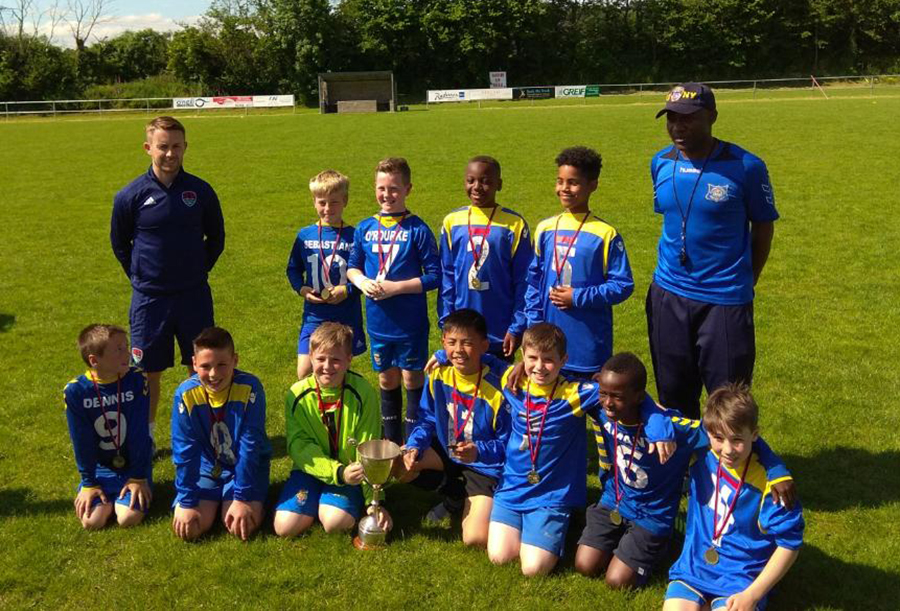 Our third match came against the hosts who were basking from a Cork Schoolboys league Semi-final Cup exit. In their ranks was also Cathal who is playing for a premier league team in England. This game pulled the best out of our team. Ethan Collins made vital saves where it was needed. But the energy, persistence, tenacity, and grit from our defence was there for all to see. Despite some skillful possession from Leeside offensive players, on a day like that Leo and Leroy made last ditch clearance on any loose balls that somehow escaped our evergreen midfield of Dennis, Amany and Rollie. Little did they expect a good interplay from the left side between Brian Healy and Amany found Sebastian who outpaced the defenders before rattling the nets. Panic stricken Leeside sensing exit from a place in final brought in their best player but little did they know we had equally abled players to match them toe to toe. Dennis’s slick skills and ball retention facilitated Rollie to collect the ball from the right, side stepped 2 defenders before rifling a shot in bottom corner. Leeside piled pressure with their foreign based player proving handy to pull one back. On a day like that defence was key to keep us on front toe. Leo and Leroy were first to every ball with heroic clearances until we conceded an undeserved penalty that was blazed over the bar. Despite a couple of minutes added on, it was actually Carrigtwohill who looked like they were going to nick a 3rd goal. The final whistle brought down the curtains to the hosts misery whilst we proceeded to meet Corkbeg in final

We went into final with tired legs but clear favorites to win it. That didn’t take long before we scored 3 minutes into the match from a rasping shot by Dennis Sitarik. Quality on the ball proved vital as Brian Healy and Cian O’Rourke got chance after chance from incessant supply from our midfield that went wasted. For some reason Cian O’Rourke from a tight angle received a through ball from Leo and hit it first time from out foot curling into top corner in what looked like a goal of the tournament. As the game looked easy we moved Leroy upfront who three times in a row got past players or outpaced defenders to blast the ball over the bar. On any other clinical day we could easily have scored four goals in each game but there’s always something missing on a day that our performance (passing and shape) left Liam Kearney, Cork City coach, marveling with admiration.

We were clearly the best team on the day with good ball passing, distribution and recovery in important areas. Looking good for next season. This is the second time recently our side came top against squads that got to local cup Semi finals and partcipating in premier league next season.