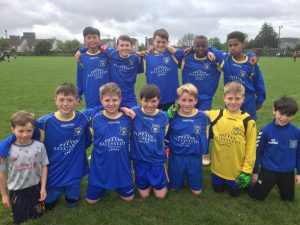 The good run of form continues for the Carrigtwohill Under-12’s as they edge out Midleton in a one-sided affair. Sensing an upset, after their promotion rivals Avondale lost to the bottom side Pearse Celtic and Youghal lost to Douglas Hall, it meant that Carrigtwohill could put a firm grip on silverware by collecting maximum points.

The intentions were clear early on, as Rolie opened the scoring with yet another trade mark run early in the 5th minute. Moments later Alex O’Sullivan threaded in another pass for Rolie on the right side where again he shrugged off a defender before beating another to smash the ball into the net for his second of the day (23 in total to date).

The lads created some chances and exchanged good passes in advanced areas but missed good opportunities that on another day could easily have been taken.

Captain Colm gave the lads a good pep talk at half-time, to up the momentum going into second half as Carrigtwohill were looking too relaxed.

Their third goal was a reward for hard work. Ethan Collins won a free kick that Rory Dolan took before Ethan deflected that shot into the net.

Midleton made a few threatening runs particularly from their centre back who had electric  pace and strength.

However, the Carrigtwohill lads at the back led by an inspired Colm Harte won most duels restricting their opponents to limited shots on target.

Midway through second half the highlight of the day came when Alex O’Sullivan beat a few defenders at near post to coolly slot the ball into the net when all expected him to cross it in.

The excitement brought an air of complacency and Midleton took advantage when their centre back made a telling run before rifling a shot from narrow angle that gave Sebastian in goals no chance.

Carrigtwohill had to be content with lots of pressure as Midleton looked threatening with few more subs coming into the game. A special mention goes to Colm Harte in defence who made vital blocks, getting to the ball first and clearing the lines to win Man of the match