20th May at Mallow

Carrigtwohill United Under-13’s travelled to Mallow on a beautiful Monday evening for our third game in five days to play Mallow Utd A in the league. Despite having a depleted squad with 11 players unavailable for various reasons and with 3 Under-12’s drafted in, they travelled more in hope than in confidence.

It was a very even first half in which both teams tried to play football on the ground which led to a good open game with chances at both ends. Fillip in goals made a couple of very good saves from long distance shots, and Leroy and Mateusz up front were causing the Mallow defence problems anytime they ran at them.

The second half started exactly the same as first with chances at both ends before Mallow took the lead when their winger broke through to give Fillip in goal no chance with a wonderful finish. Despite most of the Carrigtwohill lads playing in positions they were not used to, led by Fillip in goals, Corey at the back and Jayden in midfield, upped the tempo and really took the game to Mallow.

They scored a deserved equaliser when after Rollie broke from midfield and he played in Leroy who put in a great cross for the inrushing Akram to score his first competitive goal with a great finish. A brilliant team performance when everyone present put in a huge effort and they can be very proud of their performance.

Player of the match goes to jointly to Fillip in goals who despite having to get treatment twice during the game showed his bravery in carrying on and making some crucial saves. Also holding midfielder Jayden despite playing out of position really put in a huge amount of work in midfield to not only break up opposition attacks but also set up numerous attacks for his team.

Player of the Match: Fillip Gawlowski and Jayden 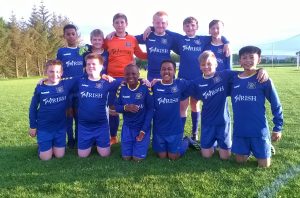