12th May at Ovens

On Sunday, the Carrigtwohill Under-11’s found themselves back in Ovens to face Lakewood in the last 16 of the Local Cup. Having beaten their second string side the previous Wednesday,  the boys knew this side would prove a sterner test and so was the case.

The opening ten minutes were pretty even, with both sides trying to impose themselves on the game. Roan and Rian went close for Carrigtwohill (both from free kicks) and Kyle had a number of opportunities as well.

Adam Lee in goal had to be quick off his line a couple of times to thwart Lakewood attacks. On 14 mins came the breakthrough from a Lakewood counterattack, when their striker fired a shot goalward, the wind affected the flight of the ball to deceive Adam.

This lifted the home sides spirits and Carrigtwohill would find it hard to build any momentum going forward for the next ten minutes. As halftime approached Lakewood scored a second following some neat play in midfield and a quality finish.

Although disheartened at the break a few words of encouragement from the Carrig coaches reminded the boys of how good they are and after scoring 15 goals in the previous 2 rounds they had to dig deep and the goals would come. Rejuvenated the away side started the second half more brightly and settled down to playing the passing football that can hurt opponents. Five minutes in Morgan Foley picked up the ball on the left side and after beating his marker passed infield to Roan who in turn found Cillian Rooney on the right, with a touch to steady himself Cillian rifled in a shot to the top corner from distance, 2-1 game on!

Carrigtwohill were now on top and it was Lakewood’s turn to absorb some pressure. Following a corner which was poorly cleared by the home team Jarlath Cullimore sent the ball back in and it was Rooney again this time with his head who found the back of the net, 2-2.

This was turning out to be some Cup tie with both sides giving everything. Adam Lee made some class saves to keep Carrigtwohill in the game while Cathal Seymor was a rock in defence and going forward did his best to set up attacks. Try as they might the visitors couldn’t find a winner with Sean Og and Rian again going close.

Extra time ensued and again chances were created Carrigtwohill. The best of them from came from Cathal’s long throws but it would finish level.

A penalty shootout followed and sadly, after a fantastic effort Carrigtwohill, lost out by 4 goals to 3.

It was an outstanding effort by all 10 Carrigtwohill players and a pity to go out of the cup this way.

Thanks to referee John Corcoran who also had an excellent game. Carrigtwohill would like to congratulate their hosts Lakewood, players, coaches and parents and commend them on their sportsmanship. Best of luck going forward in the tournament and well done to all involved.

Player of the Match: Cathal Seymor and Adam Lee 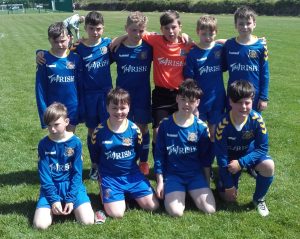 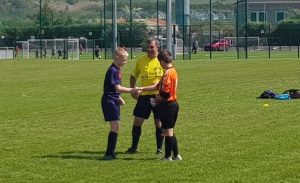 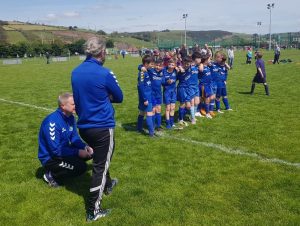 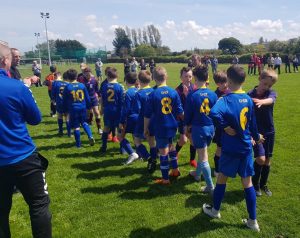