Grenagh U13’s Vs Carrigtwohill United U13’s
Date : 2018-09-15
Team: Under-13
Venue: Grenagh
Opposition: Grengh
Competition: U13 Con Elliott Cup
Carrigtwohill Scores: Cillian McCarthy Evan o Keefe 2 Jack o Regan Phillip Slewa
Carrigtwohill Score: 5
Opposition Score: 1
Player of the Match; Team
We made the trip to Grenagh for an early kick off on Saturday morning for a first game and round 6 of the Con Elliott Cup. As the game kicked off we got caught out in the first minute when some sloppy play in midfield led to a soft goal being conceded and leaving us 1 nil down.In fairness  to the lads they started to settle into the game  and created a few  good chances which weren’t taken until a great ball over the top from left back Ben Murphy  was latched onto by Cillian McCarthy  who forged forward before finishing we’ll to level the scores  with 15 Mins on the  clock. The lads started to get a foot hold in the game but couldn’t get the second goal they deserved so it was 1-1 at half time.
The second half start almost replicated how the first half did when Grenagh hit the crossbar from a long range shot. Luckily the rebound ball fell to Cathal who played a great ball up the wing for Phillip who played into Ryan who played a great ball threw the Grenagh  defence for fellow striker Evan O’Keeffe to smash the ball to the net to make the 2-1 to Carrig. Getting we’ll on top in midfield we really took the game to our opponents and deservedly got a third when Evan again with a great finish made it 3 – 1 with 10 mins gone in the 2nd half. There was no let up from the Carrig lads now and a fourth goal arrived from the penalty spot after the referee gave a hand ball from a Mark McCarthy corner which caused  mayhem in the box .Up stepped Jack O’Regan  to send the goalie the wrong way. A fifth goal from Phillip Slewa (his first goal for the club)  put the icing on the cake when he broke from midfield  to leave 3 Grenagh players in his wake, before unleashing a brilliant  shot to the roof of the net. Outside of the minor blip at the very start of the game, this was a fantastic team performance from Carrig with a great response to the early set back. Let this be the start of a great run in the competition. Well done one and all. 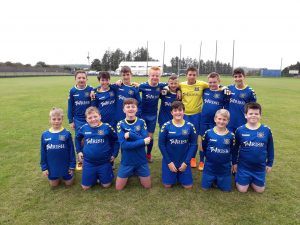