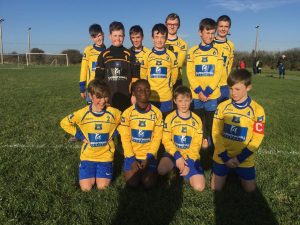 Carrigtwohill United A travelled to Cloyne to take on local rivals Churchvilla who they have played in friendlies over the last while.

They started very well scoring within the first few minutes, which gave our players confidence. Carrigtwohill had a lot of possession and from a great run from midfield they scored a long range shot to make it 2-0 at the half.

The half-time whistle was a welcoming tune for the kids after giving it everything for 30min.

The second half was just as entertaining as the first. Churchvilla scored within 10 minutes to make it 2-1.

Carrigtwohill worked really hard to keep Churchvilla at bay for the remainder of the game.

During the second half they managed to score another 2 goals which put the match beyond Churchvilla’s reach to win their second league game of the season.

Man of the Match: Luke O’Sullivan