The return match against St Mary’s was eagerly awaited because the two teams have been tracking each other pretty closely in the league table since the start of the season. It was St Mary’s who were leading by 3 points since the first encounter between the two teams back on the 11th of September which Carrigtwohill narrowly lost 2-1 away from home despite going in front in the first half.

This was typical February soccer, played on a soft pitch and in rather blustery conditions, the combination of the uneven surface and the strong wind forcing a very direct style of play. The hosts were without one or two players due to a school tour and a suspension, but you would not have known, as Carrigtwohill established possession early on and kept control of the game for most of the match. 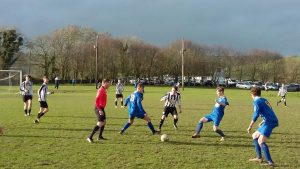 There were few clear-cut chances for either team, Darren Flynn the least busy of the two goal keepers in the Carrig goals. He had a superb afternoon and kept a clean sheet for the team (the third one in 2019), helped by the impeccable performance of the back four: Captain James O’Shaugnessy on the right, Ebe Imoh and Sean de Burca at centre back and Alex Canty on the right.

With 20 minutes to go, Adam O’Leary came in on the left and he showed good strength to keep St Mary’s winger out. These players had an impeccable afternoon with Sean de Burca such a safe pair of hand in the sweeper position.

In the middle, Sidas Pilivicious, James Barry and Robert Adam played a masterclass in closing down play and getting the ball back. This was needed against a formation which played in 4 4 2. Their tireless work allowed the back four to perform well all afternoon. The two wingers, Jason Daly and Rian Notley worked even harder and it is their box to box involvement that allowed Carrig to perform consistently. Adbul Mohammed could have found the opening in the first half, but whilst he could find a way around the full back on the right wing a few times, he could never get past St Mary’s goal keeper.

In the second half, things really hotted up and Carrig came very close when Rian Notley wreaked havoc in the St Mary defence, only to see his shot somehow blocked by the keeper’s legs before he crashed the rebound onto the crossbar. Jotham Crabb and Donagh McCarthy came on with 20 minutes to go to bring fresh impetus in the game but it seemed this one was going to end in a draw, putting an end to a good series of 5 wins for Carrig. This was when Sidas Pilivicious found his second wind and grabbed the game by the scruff of the neck, dropping back and getting the ball up the pitch with renewed urgency in search of the much-needed win. With minutes to go, good passing amongst the midfielders allowed Robert Adam to play one last ball into the path of Rian Notley who powered past the advancing keeper to blast into the net. There was time for one last attack at each end, Carrigtwohill again coming closest but the score stayed at 1 nil for the home side.

This was a very satisfying performance with all 14 Carrigtwohill players involved – it is a great for a coach to be able to rely on a full squad for a match like this where the conditions make it hard for starting players to last 90 minutes.

Hard to pick a player of the match out of this strong team performance, but James Barry in his role of sentinel in front of the back four really stayed strong for the 90 minutes.

Man of the match – James Barry