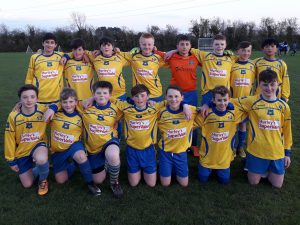 Carrigtwohill welcomed Everton to Ballyadam on Thursday night for a real 6 pointer of a game with both of teams amongst the bottom 3 in the league table.

The first half started with both team’s trying to play football with half chances been created at both ends. Everton took the lead after a defensive mistake led to a scrappy goal 10 minutes in.

The Carrigtwohill lads, despite not been at their best, worked really hard to get back into the game and got a deserved equaliser when striker Evan finished to the corner 5 minutes before half time.

The second half started the same with Everton again taking the lead. The Carrigtwohill lads 2-1 down with only 15 minutes left on the clock really showed their character when a corner from Phillip was well finished by Rollie to level the scores.

Straight from kick off and a brilliant press they took the lead when Ryan played in Phillip who finished well. Now on top Carrigtwohill really drove home their advantage by scoring two more goals from Phillip and captain Josh to cap a great comeback.

Man of match on a tough night when there was no outstanding player was Evan O Keeffe for his thankless work rate throughout the hour. A special mention for Robbie who despite being Injured turned up and gave his full support to his teammates from the sideline.