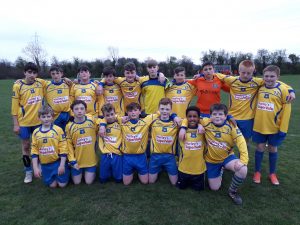 On Wednesday evening, Carrigtwohill welcomed table toppers Buttevant to Ballyadam Park for their third game in 7 days. On a lovely calm evening for football, the Carrigtwohill lads just about shaded a first half of very few clear cut chances.

The best of these fell to the hosts, when after some good football in midfield the ball was played up to Ryan who tried to release Phillip who was flagged for a marginal offside when he was through one on one with the keeper.

The second half started with Carrigtwohill again playing some good football and creating the better chances only for the final ball not to drop in the right place on the night.

Buttevant took the lead with 10mins to left and against the run of play. Carrigtwohill tried to get back into the match but playing a third game in a week took it’s toll and instead they conceded a second with 3 mins left on the clock.

The lads can take great confidence from this performance against a good Buttevant side. The improvement in the squad since the start of the year is visible and if they bring this performance to their remaining fixtures they will have a good season.

Player of game tonight goes to left back Corey Cunningham who is getting better with each passing game and was strong in defence as well as setting up attacks.

Player of the Match: Corey Cunningham