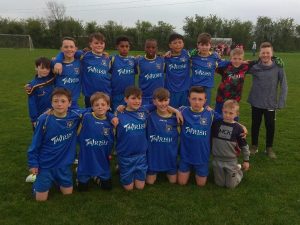 The good run continues as Carrigtwohill chase a possible League and Cup double They started well with a weakened side and were very much in control of the game with a limited threat from the visitors. However, moments later the balance shifted heavily in favour of the visitors when their centre back beat few midfield players to finish well.

Sensing an upset and with a few players playing in unfamiliar positions, Carrigtwohill reverted to their usual formation.  Soon after Leroy took a run on the left before cutting in for Rolie who finished well for an equaliser. They had a few more attempts without making a breakthrough before half time.

A tactical switch saw Colm moving to centre back and Dennis pushed upfront with Jayden playing left back.  A vital interception by Leslie in midfield who then pushed the ball into space allowing Leroy outpace the defenders to win a free kick that he took and nearly scored.

Moments later the pressure told, as some lovely interchanges found Leroy with a through pass who finished well to the bottom corner to go 2-1 up.

From then on Carrigtwohill played lovely football in forward areas with Dennis nearly getting a third. The understanding between the lads grew as Rory Dolan and Alex Lombard doubled up the midfield to frustrate opponents. Brian Healy was in brilliant form as he got to the ball first making vital interceptions at a time Castleview looked dangerous going forward.

As confidence grew with neat passing in forward lines, Leroy held on to the ball trying to find a final pass before being brought down for a penalty that he converted to put the game to bed.

Carrigtwohill finished on a high as one of the subs (Kevin) nearly caught the keeper with a beautiful left foot finish at his near post but sadly whistled off the target.  This side looks hungry for more and despite experimenting with positions still proved well worthy winners.

Man of the match Leroy Mhondiwa and Brian Healy