27th May at Ballyadam Park 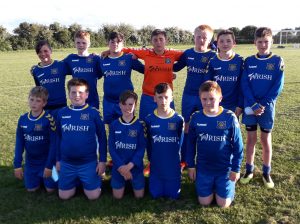 Carrigtwohill welcomed Kanturk to Blallyadam Park for their last home league game of the season. Despite having had to draft in three Under-12 players, due to a mixture of late withdrawals and injuries, they started the game well and took the game to their opponents.

Carrigtwohill took a deserved lead after 10 minutes, when from Evan’s corner, Luke O’Sullivan was on hand to bundle the ball over the line in his first ever game at Under-13 level. Unfortunately they couldn’t add to their lead before the break and led at half time 1-0.

The second half started with Kanturk coming more into the game and they scored an equaliser 12 minutes into the second half. With only 1 sub available on the night the Carrigtwohill lads started to tire and their opponents, who had fresh legs to bring on, scored 2  goals late on for a very deceiving result.

A wonderful effort from all 12 of the Carrigtwohill lads, who on the night which deserved a better result. Man of the match goes to captain Josh who broke up numerous Kanturk attacks and set up plenty of chances for his fellow teammates.

Player of the Match: Josh Tynan