This was the first game back after the break for Christmas and conditions were cold but dry. Carrigtwohill started the match missing their regular goalkeeper but both teams attacked and used the full width of the pitch available.

Carrigtwohill went out hard after the break and created two very good chances to score in the first 10 minutes but they unable to take either.

Both substitutes came on to help the cause and Carrigtwohill continued to do their best to keep the pressure on making some lovely runs up the right wing.

Unfortunately, they got caught in midfield and Kinsale scored a second,

Carrigtwohill had another good chance to score, but it was not to be on the day despite their best efforts and it was the home side who went on to score a 3rd from close range.

A good game for the lads who are making very good progress.

Player of the Match: Jakub Malecki 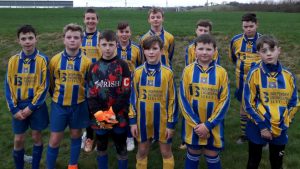