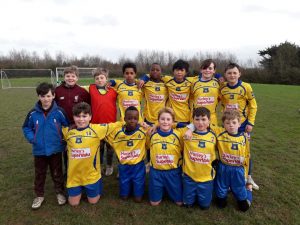 Carrigtwohill United U12 started the game against the wind, but that didn’t matter much as they made their intentions known right from outset. Rolie Durango made few threatening runs into the box that were thwarted by the keeper. Moments later, Rolie gambled into the box where he took a shot that came off the keeper before following through to score. Pearse Celtic  knitted together a few passes that gave the home side some scares but Brian Healy did very well pivoting or protecting Colm Harte each time Pearse found gaps down their left side. It was another spirited performance by Brian which saw Carrigtwohill surviving early scares from the threatening Pearse Celtic forwards.

On occasions, they were caught by a ball over the top, but Sebastian was quick enough to come off the lines and emphatically clear the ball. The game was well balanced as Pearse Celtic hit the side net from outside the box.  Soon after, good play on the right saw exchanges between Brian and Alex O’Sullivan before releasing Leroy who made a run from the right to flight in a good cross that Rolie finished well.

Carrigtwohill started the second half with a bit of over-confidence and they gave away a goal that should never have stood. The ball crossed over the line for a goal kick and Colm took the ball to the keeper to take a goal kick. While Seb was preparing to take a kickout , the Pearse forward just pushed the ball into the net when all our defenders where ball watching waiting for the referee to blow the whistle for a retake. Alas, it was a goal.

Carrigtwohill re-grouped again and made their intentions known from onset. A ball into the box by Alex O’Sullivan saw Pearse score an own goal that was counted as offside. With Amany and Rory Dolan they looked very comfortable in midfield. Rory was strong on the ball and released few good passes forward. Leslie on the left had good moves where they formed a good partnership with Leroy. Moments later Leslie worked past a defender before sending out a good through pass for an on rushing Rolie who finished to get his hattrick.

Meanwhile Colm, Jayden and Alex Kingston at the back made sure Seb in goals was fully protected.  What got by Jayden, Colm got and what missed Colm, Jayden got. Anything that went past our back three, Seb in goals collected with safe hands.

Carrigtwohill were totally in control before another good cross from the right by Leroy went begging for a tap in. Moments later Alex O’Sullivan robbed the ball from a defender and sent in a dangerous cross into the box that was bundled into the net for an own goal. 4-1 was the final result but it could have been more.

This was a game when anyone could have got Man of the match but once again it was Rolie Durango with a hattrick to his name who earned the award. He has been a most prolific forward and is scoring more than one goal per game. All that is left to see if they can go all the way to challenge for the league.