7th May at Ballyadam 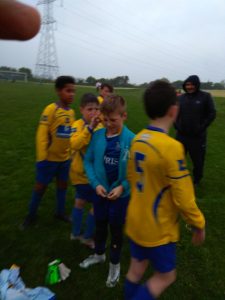 Carrigtwohill suffered their first loss after a winning streak of a dozen games to a Lakewood premier side that were deservedly worthy winners. The lads struggled to cope with the early pressure from their opponents who went two nil up early in the game. Sensing a huge defeat Carrigtwohill changed formation to 3-4-1 to try and contain the visitors. Moments later Carrigtwohill made their first attempt on goal as Leroy got to the end of a looping pass that was comfortably served.

Midway through the half Alex Lombard came in for Brian Healy with Jayden dropping from midfield to the right back position. A ball from Dennis on the left found Amany who laid the ball well for Alex Lombard who coolly slotted it into bottom corner to lift the spirits of the home side.

Half time came with a lot of hope and preparing for a possible come back. This was not to be as the visitors took the game to Carrigtwohill and Sebastian had a busy day saving shot after shot. To be fair our backline had heroic day as Dennis, Jayden and Alex Lombard had a lot to do to keep the score line descent. Lakewood proved far superior in midfield and going forward. Carrigtwohill were limited to few sporadic runs at their backline from an isolated loan striker upfront.

The visitors got another from a goal mouth scramble before another own goal as pressure mounted.  The Carrigtwohill forwards could have got another crack on goal towards the end if they didn’t keep on passing the ball in the box but that was as much as they could do. The match ended with all smiles and complete sportsmanship from both sides as they gave all they could, but succumbed to a well drilled premier side.

Player of the Match: Sebastian Korona