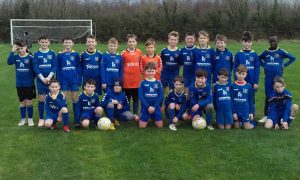 Carrigtwohill United Under-11 returned to training this week after the Christmas break and with no league fixture until the start of Feb they had a friendly game with Inch United at Ballyadam on Saturday afternoon.

With 22 players in attendance for the home team, they played 2 twin matches of 7 aside, with all players getting their fair share of game time. Inch had brought a very competitive and strong squad and it would turn out to be a fantastic afternoon of football.

This Carrigtwohill side continue to develop under the guidance of their coaches, playing out from the back, being calm in possession and posing a deadly threat up front. On their day they can be a match for any team in their age bracket. Organization and communication is as important as technical ability at any age and these boys are learning these skills as they progress.

Some of the passing football and finishing was a joy to watch at times. All these attributes will stand the boys in good stead when they compete in the U11 local cup later in the year and start the league ‘proper’ next season at U12.

In all four games Carrigtwohill acquitted themselves very well and in the latter game it is fair to say came out on top. The most satisfying aspect was the effort, attitude and team spirit shown by these boys. Well done to all involved.