Carrigaline Hibernians U12 Vs Carrigtwohill United U12

Carrigaline Hibernians U12 Vs Carrigtwohill United U12
Date : 2018-09-23
Team: Division 2
Venue: Ballyadam
Opposition: Carrigaline Hibernians
Competition: League
Carrigtwohill Scores: Leroy 3 and Ende Cungulo 1
Carrigtwohill Score: 4
Opposition Score: 1
Player of the Match; Leroy Mhondiwa
Report:
Carrigtwohill United picked up from where they left
After picking an emphatic win against Tramore Athletic in the cup, we knew very well that the biggest test was yet to come against a Carrigaline side that was still basking from an opening good win against Middleton. For most of the opening minutes the game looked very even. But as we approached midway through first half, the tide shifted heavily in favor of us. Rolie made few telling runs that put their defense on back foot and forced a few saves. Our intentions were very clear as Leroy partnering Rolie upfront was ever threatening with his galloping strides into the 18-yard box.
The first realistic breakthrough came when somehow Leroy navigated his way past some defenders and appeared to have been hacked down before shooting tamely at a very impressive Carrigaline keeper. It was not long before Rolie notched the ball into Leroy’s path who took a blistering strike that was saved but somehow forced its way through the keeper’s hands before he followed up to poke it in for the first goal. We went for half-time 1-0 up. Sensing a quick come back from Carrigaline, we regrouped quickly and our strikers took turns to shoot wide off the goal with few shots on target that pulled the best out of Carrigaline keeper. Moments later Leroy hit the upright at a time it looked easier to score than miss. As pressure mounted he made amends when he hit the roof of the net from just outside the box from a rebound that Rolie had taken a shot on goal. Carrigaline came back into the game immediately before Dennis made a goal-line clearance in a training ground pivoting move from left-back role covering the center back, after Ethan got beat through his legs. The solid defending from Colm, Jayden and Dennis was probably the difference on the day as we kept our keeper well protected for most of the time. Moments later they scored straight from a corner kick to leave our lads a little rattled with the thought of throwing away a game that we looked very much in control.
A tactical switch saw Leslie operating straight through the middle and Leroy now playing on right wing again threatening them with his pace. Midway through the second half he drove the ball past the wing back and made a run down the flank to cross in for an oncoming Ende Cungulo who finished well with a first touch, in what looked like the best team goal of the day. To put the game to bed our lads didn’t stop but again somehow Leroy collected the ball outside the 18-yard box before rifling a powerful shot in the top right hand corner, to kill any hopes of a Carrigaline comeback. Four  changes were made at once but never posed any threat to the stability of the team on a day where our lads showed strength in depth and versatility to cover any position on the pitch for the remaining 10 minutes or so towards the end. Leroy collected the match-ball and Man of the match award for being a constant threat on their defenders, hatrick and an assist.
Well done to the whole team as midfield created many chances, defenders kept it solid and all the subs plaid more than 30 minutes each with team remaining as solid as ever. 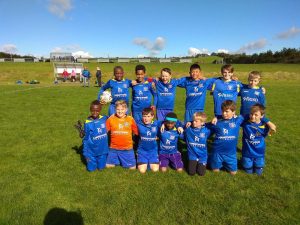