Mallow have been having a very good season at Under-18 this year and this promised to be a big challenge for Carrigtwohill who have had a tough run this season.

The early exchanges illustrated this and the visitors’ passing moves in midfield proved hard to contain for the home team. And so Carrigtwohill’s players were on defending duties for long periods of the first half, chasing the ball, often in vain.

After about 20 minutes, Patrick Ejewe, the Carrigtwohill goal keeper, ran out to pick up a long ball and kick ahead looking for Anesh Swanai on the left wing. Mallow’s right back got there first and headed the ball towards midfield. A speculative pass wide on the left wing allowed Mallow’s left winger to deliver a perfect cross at the penalty spot, their number 9 beating both centre backs and keeper to rattle the back of the net.

On the positive side, try as they might, Mallow could not increase their lead, and trailing only by one at the break, Carrigtwohill were still in the match. Wholesale changes – three subs being introduced – delivered new impetus and a better balance in midfield. Now competing for every ball and no longer second best in the 1 v 1’s, Carrigtwohill went in search of an equaliser. Mallow, however, were still in the hunt for a second goal and Patrick somehow deflected a glancing header from 5 yards over his crossbar on a corner kick.

With 10 minutes to go, yet another long ball towards Joseph Ezekiel delivered a dangerous situation in front of Mallow’s goal. In the confusion, Rian Notley was quickest to react and blasted into the goal. Although from a Carrigtwohill viewpoint, the equaliser was deserved, the resulting draw was a great result given the gap in performance in the first half.

The last 10 minutes were torrid for both touchlines as both sides got chances to get all three points, but one all it remained.

Many players played out of their skin – Shane Ryan at right back showed great composure and delivered a remarkable cross which Joseph headed just over the crossbar with 15 to go. Evan Donnelly filling in at left back – a first for him – also did very well. With the retirement of both centre backs at half time, James O’Shaugnessy and Jason Daly had to move to centre back and displayed great complementarity and high level of concentration. Man of the match goes to Abdul Rahim Mohamed however for his second half performance in midfield – covering acres of space and changing the pattern of the game for Carrigtwohill United. 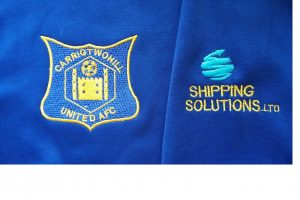