Under-13 Div 2 at Pat Bowdren Park

Carrigtwohill were back on the road again in this stop start season after playing only one competitive match in 3 months due to a number of match cancellations for various reasons. Carrigtwohill were in with the opportunity to draw level with the current league leaders Carrigaline Hibs  by winning all the matches in hand so this was a must win match for them.

The task was made more challenging as Carrigtwohill were missing a number players that meant they needed to pull in players from the U12 squad. The match opened with chances at both ends. Eoin Garvey nearly got Carrigtwohill off to a perfect start with a well taken volley that went just wide. At the other end Cal Flavin was in fine form pulling off a string saves, the pick of the bunch was a well taken shot that seems destined to go to the left of the keeper only for Cal to acrobatically get to it and knock it out for a corner. Pol O’Connor was starting in defence and formed a formidable centre back partnership with Dan Guiney. The 2 wing backs of Conor Noland and Sean Barry were kept busy all day by the Wilton attack but they were more than capable and launched many of Carrigtwohill attacks from transitions in defence and attacks down either wing.

For most of the first half it did look as if Carrigtwohill were the better team and that it would only a matter of time before they scored but unfortunately it was Wilton who scored first with a well worked corner that resulted in a goal for them to go 1-0 up.

This Carrigtwohill team has shown an incredible “never say die” attitude all season and really dug in and it was only a matter of time when the sustained pressure would pay off for them. Cathal Doyle who was the only man up front as Carrigtwohill played a 4-5-1 formation, was full of running and must have covered every blade of grass managed to get a well taken goal to drag the team back into the match. Soon after that he managed to win a penalty as he was taken down in the box and he bore down on goal. Pol O’Connor was the player to take the penalty and made it look easy as he shook off any pressure and took a near perfect penalty that the keeper had no chance of saving.

The midfield was full of running and ferocious tackling by Rory Nolan and Jack Lombard. Eventually Matti Hodnett extended his scoring run with another well taken goal to make it 3-1. Sean Guiney managed to finish things off with a well struck shot for the match to finish up at 4-1.

A special mention should go to James Doyle who stepped up from the U12 squad and slotted in easily up front and was totally unphased by the physicality of the older players on the pitch. 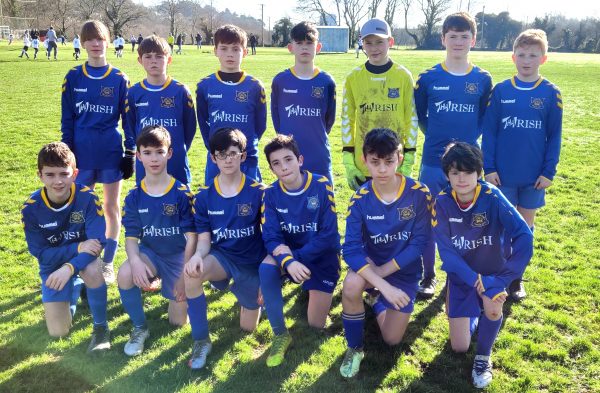