The proverbial luck of the draw delivered a strange succession of fixtures with two matches – one in the league and one in the Sean Williams Cup – to be played at home against the same opposition, Killworth, on consecutive weeks. The League web site had indicated that the league fixture would be played first and the Cup match would follow on February 8th and this provided an opportunity to study the opposition and to radically improve on the 7-1 loss recorded against Killworth last November.

A strong Carrigtwohill team took to the field with the added bonus of an equally strong bench. On a such a heavy pitch, having 15 players to count on was a relief. Carrigtwohill started well and competed in the play much better than in November. The game was even but Killworth were very effective in the last third, hitting the post following a great sequence of play. They took the lead after 21 minutes, a superb through ball between Carrigtwohill’s two centre backs allowing Killworth’s Number 11 to fire into the net from close. Only 10 minutes later, Killworth were two up, courtesy of a strange strike from the narrowest of angles which seemed destined to go wide but somehow evaded the attention of the Carrigtwohill goalkeeper and hit the inside of the far post.

Carrigtwohill were determined to get back on the scoreboard to better reflect how close a match this was. Good sustained pressure delivered a free kick 40 yards out which was floated into the 18-yard box and was steered into the back of the net by one of Killworth’s defenders. This was just what the home side needed but alas, it was the visitors who increased their leads when they were awarded a very soft penalty for a shoulder charge in the box that looked more like a free out from the touchline. 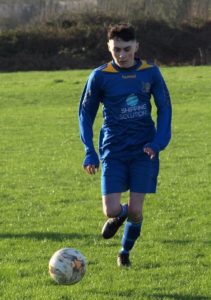 Three one at the break was not the score line the home team wanted, but at least the game was still there for the taking. A quick reshuffle to switch into 4 4 2 and add pressure on the Killworth back four did the trick and a quick counterattack lead to a pull back for James Barry who shot with great power towards the bottom left corner. Killworth’s keeper somehow got to it but Darragh Hoare was on hand to drive the rebound into the roof of the net. This was magic stuff for a player who has just come back from injury and it was a lifeline for Carrigtwohill.

The next 10 minutes would confirm the home team’s domination and great interplay on the right wing allowed Abdul to play a one two and get into a great position 25 yards out to fire a fantastic curling shot into the bottom right corner.

There would be no more scoring before the end of the match but still plenty of surprise as the ref announced extra time was next.

A quick check on the web site confirmed that the two fixtures have been reversed at some point: Cup was to be played today and the League match was moved to the 8th!

With a great opportunity to “take all” offered to the hosts, Carrigtwohill went back into action looking for a winner. However, despite dominating the 20 minutes of extra time, they failed to score and were dragged into a penalty shoutout.

We all know what these are like and in the end, it was Carrigtwohill who flinched as the fifth penalty sent the keeper the wrong way but missed the target by a whisker…Cruel outcome for the hosts…

So, half full of half empty? Hard not to feel heartened by the quality of the play in front of such quality opposition – from 7 nil to 3-3 aet in just a few weeks is great progress. But hard not to feel very disappointed by the outcome. Revenge may only be around the corner however, as this match is replayed next Saturday… in the League this time!

To finish on a high note, let’s talk about the players: it’s just too close to call a man of the match today. Patrick in goals who pulled a string of decisive saves including winning a one v one at the crucial time to send the match into extra time; Darragh Hoare and Abdul the goal scorers; James O and Jason Daly who combined amazingly at centre back; Shane and Ebe at full back who saved the team with vital blocks, not to forget Sidas, Robert and James B fighting like lions in the heart of midfield and Rian, Anseh, Joseph and Ben attacking the back four all afternoon and Adam who fired his penalty into the top corner with compelling poise – all 15 players deserve praise. A man of the match would seem artificial today! 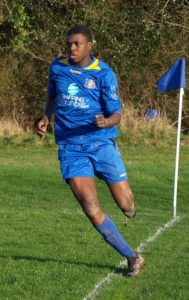