Tramore Athletic U12s Vs Carrigtwohill United U12s
Date : 2018-09-16
Team: Under-12
Venue: Tramore Park
Opposition: Tramore Athletic
Competition: U12 Albert Conboye Cup
Carrigtwohill Scores: RolieDurango 3, Leslie 1 and Leroy 1
Carrigtwohill Score: 5
Opposition Score: 2
Player of the Match; Rollie Durango
A turn around in fortunes is what our lads received on a sunny Sunday afternoon. Coming from a surprising league loss to Leeside who we beat to win the cup at the end of last season, our lads knew very well that there was need to regain some lost pride. Tramore Athletic  just happened to be on the receiving end of it.We made our intentions known early in the game but failed to break down the stubborn Tramore Athletic defence. Midway through the game we decided to make a tactical change in personnel we brought Leroy in to the game on the right and to inject some pace and pressure going up the wings. That quickly paid off as Leroy bundled in a goal in a goal mouth melee at a time when we were pushing Tramore more into their own half. A few minutes later Rolie Durango collected the ball from near the centre circle and ghosted through Tramores midfield going past players with ease and continued his run through their defence to score a fantastic solo effort. As Carrig continued with relentless pressure, our lads were itching to get a few more goals.We got a corner kick, and with a straight from training ground drill of having three attackers running front, centre and back post, it paid dividends as Rolie again got to the end of a well flighted corner kick to head the ball into the net.
We went in at half time with a 3 goal lead. As the second half started we continued were we left off from he first half and kept Tramore on the back foot. Moments later the pressure told and there was a very good team goal when Leroy slipped through a great pass for Leslie, who lobbed the ball in to the top corner with  an oncoming goalkeeper to go 4:0. Feeling very comfortable in the game we decided to shuffle the team putting players in very unfamiliar positions and to see some players playing different rolls in game time situation as the game was looking as good as won. This backfired immediately as Tramore came back in the game with two well taken goals from a skillfull front man who found his way quite easily through our backline.  Sighting a catastrophe, we regrouped again with our players back in their strongest positions on the pitch before once again Rolie went for another solo run from the right to place it in bottom corner.  That completely but silenced Tramore who were sensing a dramatic comeback that was never to be. The game finished 5-2 in Carrigtwohill favour. It was a fantastic team performance all round with Rolie Durango making all the difference on the day. Scoring a fine hatrick, he was a constant thorn in Tramore’s side. 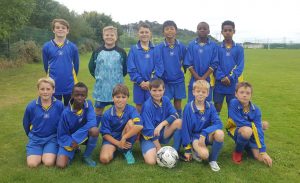