A brilliant performance last Monday evening at Ballyadam Park by Carrigtwohill saw them progress to the 2nd round of the Under-11 Local Cup with a comfortable win over Springfield Ramblers A. This was the boys first ever official competitive game and the nervous tension in the dressing was tangible before kick-off.

The nerves were soon settled by an early goal from Kyle Kidney. The home side dominated the early exchanges and went close through Kyle, Rian and Roan (hitting the post) before Kidney doubled Carrigtwohill’s lead on 12 minutes. Springfield, not knowing what hit them, had the ball pinched from the resulting kick off and Rian had his 1st of the evening. He would add a superb 2nd from a long range shot making it 4-0 at half time.

The second half was more evenly contested with Springfield trying to claw their way back into the game but the Carrigtwohill defence marshalled by Niall Barry stood firm and Adam Lee in goal was rarely troubled. Rian Thornhill grabbed his hat-trick following good pressure from a corner and Roan O’Keeffe would again be denied by the woodwork seeing his brilliant effort crash off the angle of the goal frame.

Cillian Rooney got his reward with a goal in the last few minutes and the rout was completed when Rian scored his 4th in injury time. A fantastic team effort by all 10 players ensures an away trip to Lakewood in the next round, with so many outstanding performances it is impossible to pick a man of the match. Well done to all involved. 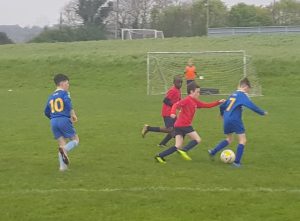