Carrigtwohill United A travelled to Ballea park on the back of their first league win. They have worked hard on their passing the last few weeks in training and really showed this right from the start, this game was played on astro, so good passing was essential.

Carrigtwohill were well on top and broke through the opposition defence after 10min from a great pass onto our striker who was taken down and awarded a penalty.

The penalty was converted to make it 1-0 at the half time interval.

Defence on the day was superb and Carrigaline had little if no chances to score, but having just a one goal lead anything can happen.

Well done to all coaches and kids who represented their club very well.

Player of the Match: Jawad Dounmu 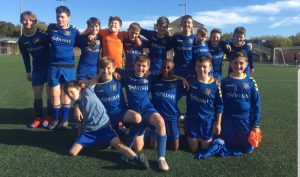