Another weekend and another torrid derby for Carrigtwohill United Under-18’s against rivals Youghal. In the third match between these two teams within a month, both sides had the ambition to win the fixtures and it showed from the outset. For this level of the game, the passing was unbelievable with Youghal delivering the razor sharp forward passing that is their forte and Carrigtwohill playing the more possession-based game in midfield. This certainly was an opposition in style between the aggressive team playing in 3 5 2 and the more conservative team playing in 4 5 1.

However, it was the more conservative team that was to control the game better, Joseph Ezekiel and Rian Notley scoring on either side of half time, two individual goals that were similar enough where they managed to get in behind Youghal’s back three to rifle the ball into the net from close.

This was great composure from the Carrigtwohill forwards and it got to the stage in the match where, at 2 goals up and 10 to go, the three points seemed to be within reach for the hosts. The back four was working out superbly with Jason Daly giving a master class in the sweeper position and James O’Shaugnessy tackling the Youghal forwards as soon as they came in dangerous positions. The full backs Shane Ryan and Adam O’Leary were doing very well – displaying a good balance of solid defending and coming in support of their forwards.

The dense midfield was working well also, with James Barry playing one of his best games this season, Abdul Rahim Mohamed and Sidas Pilivicious chasing every ball and playing of each other superbly, on either side of him. The wingers were also in full swing, with Anesh Swanai, David Muller (later replaced by Rian Notley and Evan Donnelly) fighting hard to contain Youghal’s pacy wide players in the lateral channels.

Then, there was a demonstration of why the game of soccer can have you scratching your head sometimes as Youghal threw everything forward in search of goals and scored twice in 4 minutes – in similar fashion: a pinpoint through ball between the centre backs for a 1v1 on the keeper. What was remarkable was that Youghal had been knocking at the door for 85 minutes, crossing from both wings and driving through the middle, but Carrig’s back four and goalkeeper had responded in kind every time. Not so in the 85th and 88th minutes. Two all it finished.

So, was a 2 all draw a fair result on the day? Possibly! But did the scenario of the game make it a strange match? Absolutely! And for Carrigtwohill’s Under-18’s a fair lesson: you need to work hard to defend a two goal lead…all the way to the final whistle.

One highlight of the game came in the 40th minute when Adam O’Leary found himself defending a dangerous cross at the far post, with three Youghal forward around him and he somehow cushion his header into Patrick Ejewe’s grateful harms from 10 yards out. A moment of soccer brilliance, but also the best way to age your manager prematurely!

Man of the match goes to our heroic goalkeeper Patrick Ejewe (the pick of this teammates!), who made sure it stayed at 2 nil for soooooo long. With 10 minutes to go, he saved at full stretch with his left hand in a 1v1 encounter against one the Youghal forwards: this capped a strings of superb saves. His distribution was also excellent both from the hands and from the ground – Patrick is really getting there with his match day performances.

Player of the Match: Patrick Ejewe 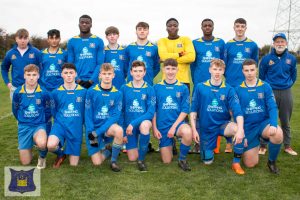