Carrigtwohill Utd Under-15s Girls played their final game of the season at Ballyadam on Thurs 2nd June, with a very competitive game against Corkbeg u15s.

The first half was played out in mild dry conditions. This helped the tempo of the game, with a very open and entertaining game of football being played by both teams and numerous chances at both ends. Sophia (playing in a new role as goalie) was very solid, making a number of key interventions. She was well assisted by a solid backline of Avah, Katie, Brooke & Eorann (C), with their positional play and team communication very impressive throughout. Meadbh was as industrious as ever in midfield breaking up opposition play and leading attacks. A very mobile and hardworking midfield of Sarah, Sophie & Julia continually helped to create positive scoring opportunities. Up front, Kaci & Laura, with Megan as sub, were creating many chances and working hard.

For all the positive play, the game remained 0-0 at half time.

Then after half time, everything changed! First the weather, with a massive down pour bringing a very damp change to things. But the infectious enthusiasm of both squads shone out with the girls calling for the game to continue, regardless of the conditions, as they were even more determined to enjoy their game.

This upbeat attitude led to Corkbeg’s opening goal, from a well taken break on the right and a looping shot from the edge of the box. A change in formation by Carrig, bringing Sophia out to midfield, swung momentum and led to Carrig’s first goal. After some excellent play down the right by Sophia and a teasing cross into the box, quick touches by Sophie & Laura resulted in an equaliser. Carrig followed this up with a 2nd goal about two minutes later, from a good shot by Kaci. Following this the game flowed back & forth and it was Corkbeg who grabbed the final goal of the game about five minutes before full time, with a well taken shot after some good wing play down their left side.

2-2 was the final score, which was a fair reflection of a very good game.

A special mention to Corkbeg, especially Paul, Jim and all the coaches & girls involved there. Both these squads have used this formative season to develop their teams through a series of very competitive and engaging games, played with a like-minded ethos to soccer development. This has massively helped prepare both squads for the seasons ahead. CUFC would like to express their sincere thanks to Paul, Jim and all involved in Corkbeg for their friendship throughout this process.

Player of the Match:

This has to be a squad award! These girls have been an inspiration throughout the past season. Not alone have they strived to evolve their own skills, team and identity, they have also played a key part with the successful u13s squad, and many of them have also committed to coaching younger girls on the u7s & u9s squads. Well done Girls! 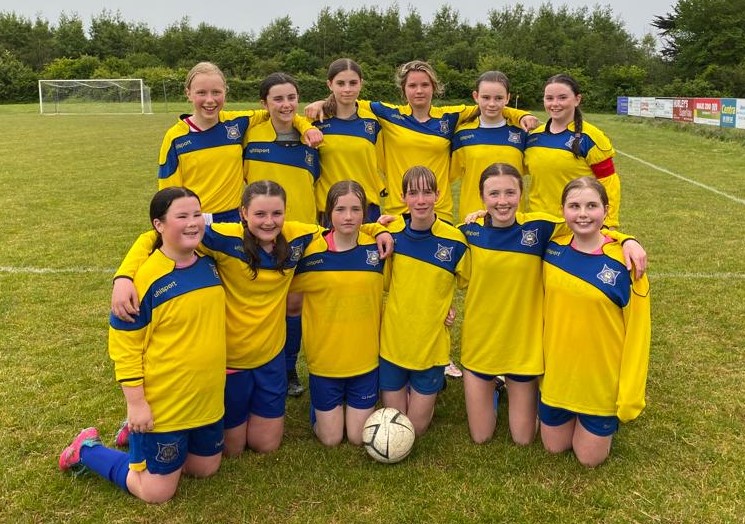