Carrigtwohill United welcomed Wilton United on a lovely spring evening in Ballyadam – perfect for soccer. The players on both sides were not to disappoint putting on a 6 goal thriller which had the supporters enthralled.

This is a match which couldn’t have started any better for Carrigtwohill, who went 2 goals up within 5 minutes. From the kick-off, it was clear that Wilton could not handle the wing play of Abdul Rahim and he won an early corner from which Evan Donnelly sweetly finished to continue his goal scoring streak. Shortly afterwards Anesh Swani scored direct from a free kick which deceived attackers and defenders alike to find the corner of the net. Abdul continued to create chances and Ronan Ymedi came close to scoring the third. It seemed to be all one way traffic for the first 15 minutes of the match.

These teams have met four times over the last two years, with rarely a goal between them and Wilton to their credit found their feet. They took control at midfield and started to create chances of their own with their number 9 finding space to trouble the Carrigtwohill defence with Bartek having to be alert in goals. Wilton pulled a goal back and this was a double blow as Alex Canty, playing at centre back had to come off with a twisted ankle meaning both defence and midfield had to be reshuffled. Wilton now came roaring back into the match and levelled just before half-time when Carrigtwohill really should have cleared their lines. 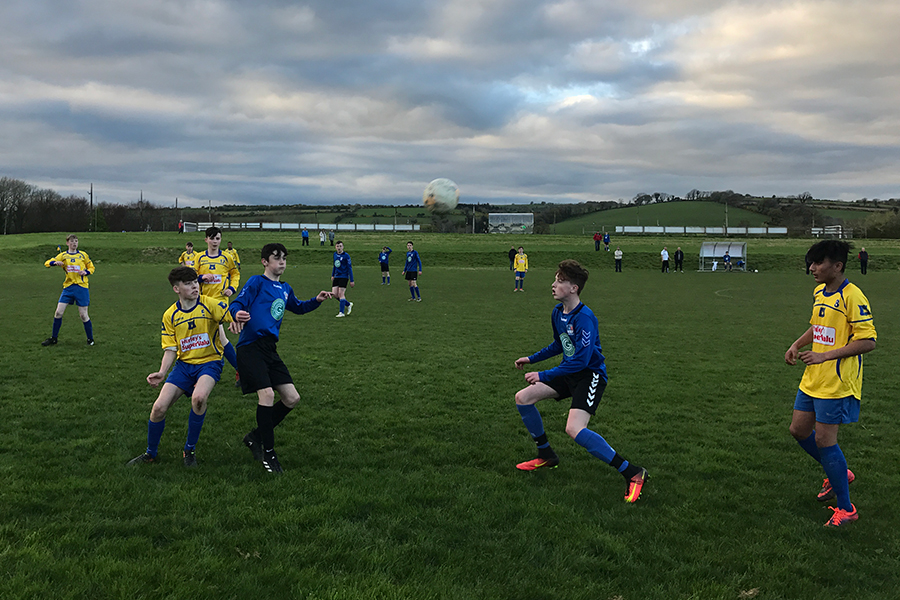 The second half was an open and lively affair. Ronan continued to make chances, but Wilton had managed to curtail Abdul. It was proving difficult for either team to control the match, as it was end to end action. Alex Canty returned to the shore up the defense and the Carrigtwohill back line were under constant pressure, but despite this they were not yielding up chances to the Wilton attack with Victor, now between the posts not being troubled too much. However, it was obvious to all, that the 2-2 score line would not hold until the end and so it proved. With 20 minutes left to play, Ronan was pulled down in the box from which Evan scored the resultant penalty.

To Wilton’s credit, it would have been very easy for them to get deflated but they re-doubled their efforts and continued to threaten. They managed to hit the post from a long range shot and then with just 10 minutes remaining, they won a contentious penalty. Their dangerous Number 9 made no mistake from the spot and it was now 3-3. The final few minutes were like a Cup Final, with both teams giving their all in order to find a winner. Carrigtwohill came very close when Abdul broke free but couldn’t quite find the net and it was to finish honours even.

Well done to both teams – it might have felt like points dropped but with 4 matches left to play it could prove to be vital as Carrigtwohill push for one of the promotion places.

Player of the Match – Evan Donnelly