The Girls Under-13 squad were rocked by a number of late withdrawals less than 24 hours before their game against Douglas Hall. Thankfully a few parents answered the SOS calls and they travelled to Moneygourney full of confidence.

It was a bitterly cold day with a sharp Easterly wind. To say the Eskimos in the dugout were feeling the cold was an understatement!!!

Regular Number 1 Emily was missing and our stand in keeper Amelia had to cry off on Friday night. Up stepped Claire Crowley who put in a flawless performance and earned player of the match in the process. Centre backs Brooke and Caitlyn grew into the game after a few nervous moments. The full backs Ellen and Megan were very solid and dependable. Midfield was Anna, Maedhbh, Sophia and Sarah. All four were instrumental in everything good Carrigtwohill did.  Up front Gemma partnered Lilly, who caused Douglas hall lots of problems with their skills and running.

Carrigtwohill started the game brightly and were 1 nil up after 5 minutes which was a great individual goal from Sophia Redmond. Lilly scored a good team goal 8 minutes later and it was time for changes to be made or else the squad risked getting frostbite. Karla replaced Lilly and was a constant pain in the Douglas Hall side. Carragh replaced Gemma and put in a huge performance with a fantastic appetite for work and was very unlucky not to score. Katelyn O’Leary made her competitive debut for the team and slotted in really well. Niamh Cuddigan replaced Ellen and put in a very determined and commanding performance. Mijka replaced Anna Madden at the start of the second half and Caoimhe was also introduced. Both had really impressive games and are improving with each outing.

Carrigtwohill had lots and lots of possession and territory in the second half and try as they may the third goal would not come with the Douglas Hall keeper pulling off some outstanding saves. Some of the Carrigtwohill play was fantastic and they are really putting it up to other teams in the division.  This team has been together for less than 3 months and are a very special group of girls to coach. Their commitment and enthusiasm is a joy to behold. No matter what the weather they’ll turn up to training with smiles on their faces.

Special mention to a very valiant and well organised Douglas Hall team who never game up. Sean their coach was a gentleman to deal with and should be very proud of his charges.

Up next on the 11th December is a home game to Kanturk which will be a top of the table clash.

Well done to the parents and the coaches for the commitment in bringing the girls to training and matches in all kinds of weather. 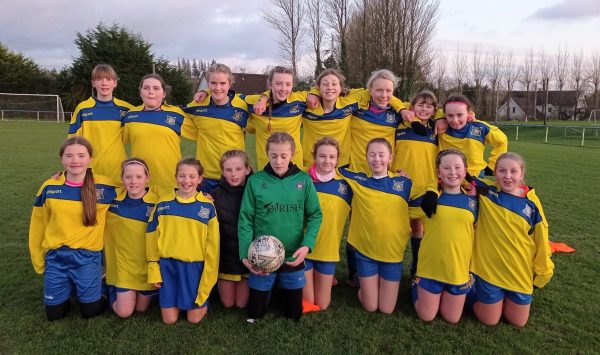