Under-13 Div 2 at Ballyadam

Carrigtwohill welcomed Crosshaven to Ballyadam for their first home match since mid November. It was always going to be a tough encounter and so it turned out to be.

Hugh Crowley managed to get Carrigtwohill onto the scoresheet with a well taken goal to put them 1-0 up in the opening minutes. This seemed to spur Crosshaven into action and there was no doubt  that they were the team on top for the next 15 or 20 mins as they launched wave after wave of attack. Carrigtwohill managed to defend the numerous corners that this passage of play produced but there was nothing that they could do when Crosshaven scored a well taken penalty to make the score 1-1. Cal Flavin was in fine form and produced numerous saves that prevented Carrigtwohill going further behind at this stage but eventually all the Crosshaven pressure paid off when they went 2-1 up  from a well taken free kick.

Jack Lombard was brought on as the Carrigtwohill team switched to a 4-5-1 formation in an attempt to contain the attacking threat coming from the Crosshaven midfield. This had an almost immediate effect and managed to redress the balance of play.  This was a dog fight though and Carrigtwohill had to dig deep. There were a number of crunching tackles that went in on both sides as neither side wanted to concede ground but the Carrigtwohill players did not shy away from any tackles especially the midfield of Pol O’Connor, Matti Hodnett ,Eoin Garvey, Sean Guiney and Jack Lombard.  The backline of Rory Nolan, Cillian McCann, Daniel Guiney and Conor Nolan were really up against it but did the team proud. One memorable passage of play was when Rory Nolan broke down an attack just inside of his own box and went on an incredible solo run to leave at least 3 or 4 player dead in their tracks as he covered well over half the length of the pitch.

In the second half Carrigtwohill began to settle and eventually gained the upper hand as Hugh Crowley and Cathal Doyle began to create more chances up front. Hugh who was having a great game managed to grab his second goal of the match to make the score 2-2. Sophia Redmond came on in the last 15 minutes and brought an injection of pace, tackling and crossing to keep the pressure on Crosshaven. Even though Carrigtwohill were on top at this stage, it did appear that this match would finish in a draw. Sean Barry finally settled the matter with a well taken shot from the edge of the box to beat the keeper and send the players, coaches and home crowd wild. The final few minutes of the match was not an easy time for the Carrigtwohill players or supporters as Crosshaven threw everything at them in search of a late equaliser. With just moments to go Crosshaven were awarded a free kick just outside the box, it was a well taken free but Call Flavin just managed to get his fingers to it to avert any danger and ensured Carrigtwohill collected all 3 points.

This was a tough and hard fought victory, the toughest that this team had faced in a while but they faced it with the incredible spirit that has seen this team win every match in the league since their opening day defeat to Carrigaline Hibs back in September. They have put themselves in a great position to challenge for the title and never to give up no matter how things are going… valuable life lessons if ever there were!.

Player of the Match: Cal Flavin 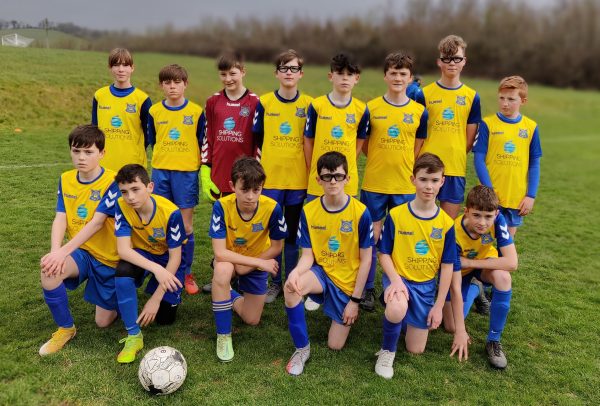