U13 V Corinthians B

U13 V Corinthians B 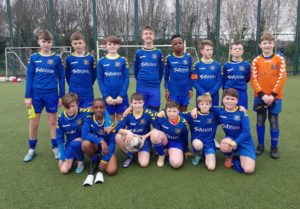 The Carrigtwohill United A squad travelled away to face Corinthians B who are top of the Division 5 table. The lads are on the back of a great away win recently against another Top 3 side.

Carrigtwohill couldn’t have started the game any better scoring their first goal after 9 seconds which was maybe a record somewhere ? Corinthians had the tip off and the Carrigtwohill striker chased down the ball so well, he was able to win it and take a shot which the keeper saved. Luckily this teammate was waiting to pounce and he calmly slotted it home.

Carrigtwohill  kept the pressure on their opponents throughout the remainder of the first half, with the lads were well up for this challenge in testing conditions. They scored their second goal 7 minutes later with a superb pass from midfield to the striker who hit the target. The Corinthians keeper couldn’t keep it out of the net so it was 2-0 at the half time.

The next 20min were going to be vital, and after making a few changes to the set up, the away side came back into the game and had some good chances. With 6 min to go the lethal strike partnership made certain our 3 points with a great left leg strike into bottom corner from a tight angle and the match finished 3-1 to Carrigtwohill