Carrigtwohill United Under-12’s travelled to Leeds Park, Ballyvolane on Sunday morning full of confidence off the back of an impressive home win against Riverstown last week. With a 14 strong squad on show the boys were determined to keep their winning run going and were not to disappoint.

Captained by Roan O’Keeffe the away side started well keeping good shape through defence and midfield and the movement of the front two had Leeds worried from the off.

On 10 minutes, following a Leeds corner which was cleared by Morgan, Roan and Evan combined well in midfield to feed Rian who in turn released Cillian to finished well from a tight angle. Two minutes later following another Leeds corner Carrigtwohill would have their second and this was all about the understanding developing between the front two. Cillian picked up the ball on the left inside his own half and beat 2 Leeds players before passing infield to Rian, with good control and a neat turn Rian spotted Cillian had continued his diagonal run and played the perfect ball into his path, without breaking stride he beat the last defender and drilled the ball across the keeper and into the bottom corner.

Carrigtwohill were really enjoying themselves now and when Evan won a free kick on the edge of the Leeds box 3 or 4 players could be seen standing over the ball. The coaches wondered what they were conjuring up, Roan placed the ball and the lads took their positions then the Carrig skipper clipped a lovely ball over the opposing wall which was met with a deft header by Rian, 3-0.

Defensively the away team were sound, working well together to snuff out any hope of a Leeds revival. Cathal Seymour and partners covered each other and supported the midfield in turn. Just before the break Carrigtwohill added a fourth when Evan released Rian and the frontman made no mistake with the finish.

With the game more or less wrapped up the second half wasn’t played with the same intensity and on 40 minutes Leeds would score a consolation goal following a free kick, Adam Lee (who had a super game) will be kicking himself for not dealing with the initial ball and Leeds scored off the rebound. Tom and Cillian had further chances to add to the visitors lead but some brave goalkeeping denied them. With 5 minutes left on the clock Osas(who came into a great game) released Noah E on the left and he drove at the Leeds defence before unleashing a shot but it was his namesake Noah N who would get the final touch to make it 5. Rian bagged his hat trick in the final seconds to round off a comprehensive victory for Carrigtwohill United. Man of the match is shared by Cathal Seymour for his superb defensive display which allowed his teammates to build going forward and Rian Thornhill hat trick hero and two assists, well done to all involved. 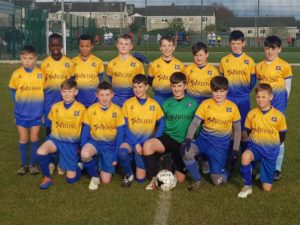