One last effort required before Christmas, before retiring until 2017! This was another home fixture for Carrig’s U12s, and a tough one against league contenders Douglas Hall.

The conditions were perfect for a December match, although the ground was decidedly heavy for the young players. This probably slowed down the ball and the running a small bit, but you really could not tell from the way the match went, very even and very close for all but the last 3 minutes of play.

Both teams were well organised and attacked and defended with equal determination, although Douglas Hall managed to sneak in a strike at goal through a forest of legs which deceived Carrig’s goalkeeper. At the other end, a succession of 5 excellent corners was somehow defended by Douglas Hall, with defenders and goalkeeper throwing last ditch blocks to deflect the ball and saving on the line.

In the second half, Carrig pushed and pushed and could have equalised a number of times, notably when Ruairi Adam’s clever back heel chose the wrong side of the post on a Cormac Murphy free kick. There was also marvellous work on the left wing by Ose Oyon who dribbled past three players before delivering a perfect cross into the box. Unfortunately for Carrig, Douglas Hall’s defence were up to the challenge. As Carrig went in search of the equaliser however, there was always the possibility of a counter and this happened with 3 minutes to go. After 5 minutes of sustained pressure, the ball broke out from one of Carrig’s corner kicks and Douglas Hall got a chance for 2 nil at the other end which they took.

That was the end of Carrig’s challenge given the time remaining, but Carrig’s players kept pushing all the way to the final whistle – still, there was no way through.

Player of the Match – Darragh Higgins

After the game, there was the opportunity for celebrations nonetheless with the team congratulating Cormac Murphy for being awarded the Player of the Month shield for his performance both in matches and at training in October / November. That was a great way to finish 2016 and the coaches took the opportunity to congratulate all players for the great first half of the season which they have had. The defending has been excellent, now we must try to score a bit more, especially in tight games where taking your chances is so important. 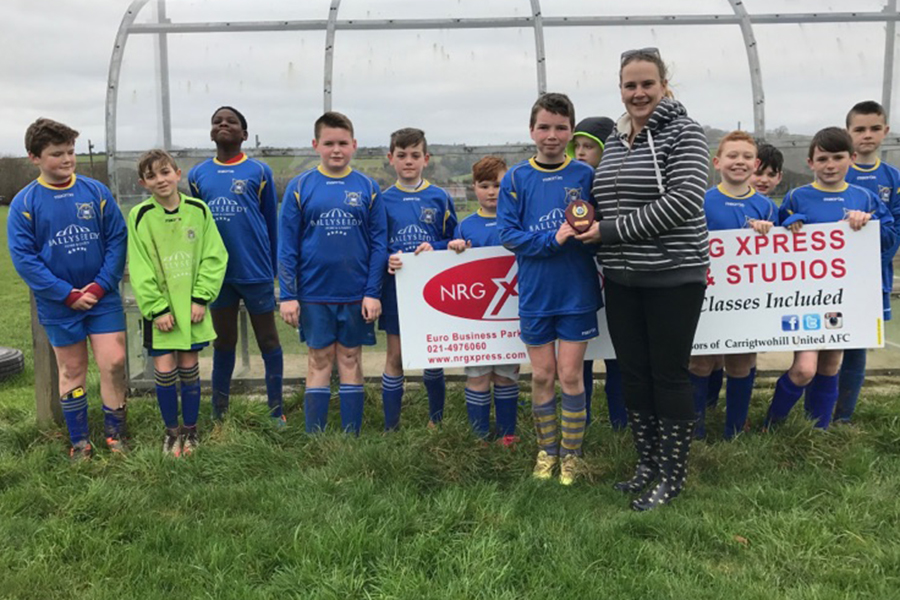 Cormac Murphy receives the Player of the Month award, donated by NRG XPRESS (little Island) from his mum.