Under-12 Div 2 at Whitegate

Carrigtwohill United Under-12’s most recent league fixture was away at Corkbeg on Sunday 16th.

The boys started really well, made some really good chances and were unlucky not to get an early goal. The first half was a really well contested half, very competitive with both teams playing the game with great determination while creating chances both ends.

The clean sheet on the day was owing to some calm defending and concentration from Bart in goal who was well supported by Luke, Patrick, Cian and Odhran in defence throughout. Isaac formed a terrific shield in front of the defence while also supporting our midfielders when transitioning onto attack.

Aaron Power led superbly from the front and got on the score sheet twice in the second half – on 41 minutes from a fine through ball from Oisin and closely followed that with a second 2 minutes later – a fine, dinked finish over the keeper after a wonder through ball by Owen.

Carrig finished quite strong offensively with some great winger play by Oisin and Sam, with Owen pulling the strings behind Aaron. Ryan, James and Fionn all worked really hard supporting our defence and making offensive runs helping to keep our clean sheet on the day.

This was a very close game that really good have gone either way. Well done to Corkbeg for a hard fought and sporting match.

A good day for the boys to get up and running after a stop, start season. On the day the MOTD award was shared between Isaac for fulfilling his defensive and offensive with vigour and the excellent Owen for his creativity and ability to spot opportunities and pass to team mates selflessly.

Well done lads, and onwards to the next challenge 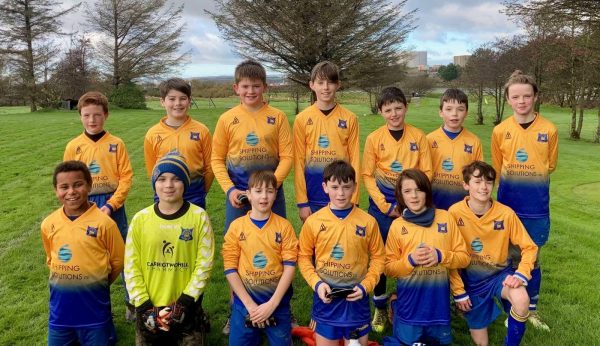