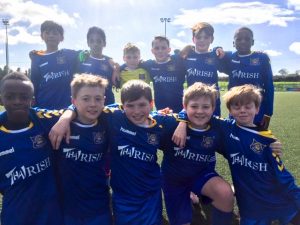 Carrigtwohill United Under-12’s travelled to a very windy Moneygourney, Douglas for an 11.30 kick off on St Patrick’s Day and won the fixture 1-0.

This was a very difficult, tight game. The very windy conditions made it very hard on goal keepers and defenders particularly to clear the ball and gain any distance on it at all.

Carrigtwohill played some great football in the first half which was played for large patches in the Douglas Hall half. The boys created chance after chance but just couldn’t get the break to score. Rory, Leslie Leroy tried very hard up front, creating some great chances for themselves and others by playing some really clever football at the same time, but the ball just wouldn’t hit the net for us for a variety of reasons!

There was some really good football played by the boys throughout the game which was great for coaches to see but also a sensible approach on such a windy day, the ball had to be kept on the ground and that is where the team prospered in terms of carving out some great opportunities.

The second half was a different story altogether! 10 minutes in, our talisman Rollie scored after some great hold-up play and nicely weighted pass from Leroy, Rollie dribbled closer to goal to finish really well, low and hard, beyond their excellent keeper. Good advice from Manager Joe too at half time, advising that in that weather, getting closer to goal was key to scoring! ?

The conditions really played a factor for the remaining 20 minutes, with the wind against us Carrigtwohill defending was really superb. Sebastian had a busier second half and again was so brave in coming off his line to make some important interceptions, Colm did as he did all season – showing terrific pace and strength all through the game (leading by example) with great support from the always dependable Dennis and Jayden with midfielders Brian and Ethan really working hard to support the defence in the second half. Rollie covered huge ground on the day and carried on being a goal threat throughout.

A special word has to go to our Man of the Match on the day, Amany – who made so many blocks and was really all over the pitch reading the game excellently, an outstanding #6 performance by Amany on the day to cover his defence so well and help us hang on for the 1-0 win.

Overall a really important win in the context of this league and a hard fought one. Making the Paddys Day celebrations all the sweeter!

The coaches would like to thank all the boys who turned up on a very windy, Paddy’s Day morning to support the cause!