CUAFC, its members and its committee are delighted to welcome a new sponsor in the Club. In addition to our Main Sponsor Ballyseedy Home and Gardens and our Schoolboy jersey sponsor Vmobile, we are delighted to be able to rely on Carrigtwohill Pharmacy, who have become the dedicated sponsor of our Academy. The academy was created just over a year ago to cater for the needs of our younger players, from Under 7 to Under 9. In 2015 / 2016, about 100 young players are registered in the academy and their specific needs in terms of training and match play requires additional investments by the Club. 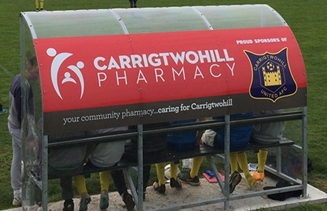 The deal which has now been agreed between CUAFC and Carrigtwohill Pharmacy is a 10 year deal which promises to bring regular income into the club and to really make an impact on the ability of committee members to develop CUAFC and its academy over the long term.

Another component of the support provided by the new sponsor is the very substantial investment which they have made in our latest structural development: both pitches are now equipped with state of the art dugouts, two of which (one on the top pitch and one on the juvenile pitch) bear the colours of the new sponsor in association with the club crest.

As can be seen in the above pictures, players and coaches, as well as spectators, have not been slow to realise that Carrigtwohill Pharmacy is “caring for Carrigtwohill” in more ways that just dispensing medicine! Staying out of the cold and rain means a lot at pitch side and occupancy is likely to be hotly contested as the winter arrives! 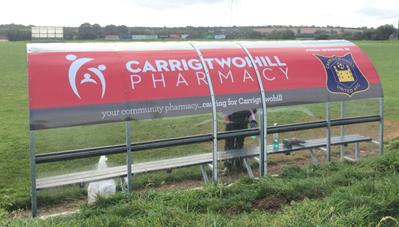 All members of CUAFC’s committee are extremely grateful for the arrival of the new sponsor and the long term commitment made by Ger Browne, owner and manager of Carrigtwohill Pharmacy because they know full well, just how much the 10 year investment in the club will deliver. Ger himself and all staff at Carrigtwohill Pharmacy are also delighted with the new deal as they are very much part of the Community and feel passionate about being involved in community projects. We cannot wait to see our little players taking to the field in the new sponsored kit!

More on this will come later!