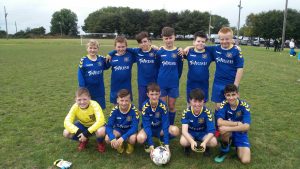 On Sunday the 2nd of September our U13 team took on Ringmahon Rangers in a friendly game at Ballyadam Park. Following a number of late withdrawals we only had the bare 11 players on the day.

After a bright start we conceded a goal against the run of play. This lifted the visiting team and we were under pressure now. The lads tried to respond but without much luck we went in 1-0 down at half time. We told the lads at half time they were only 1 down, and if they could up their workrate they could get back in the game. The lads to their credit did just that.They took a hold in midfield especially Phillip and Jack who caused the opposition all sorts of problems when they ran at them. Forcing the opposition in to fouling and giving away free kicks. One such free led to the equilizer when after Jack O’Reagan was fouled he stepped up himself to curve the ball around the wall and force a defender to put the ball in to his own net. 1-1 and it was game on now. As the game wore on both sides were in search of a winner. Unfortunately Carrig conceded an own goal themselves when failing to organise defensively from a throw in while attempting to clear the ball it hit a retreating defender only to ricochet in to our own net. Score 1-2 to the away team. However the character in this squad really shone through at this stage when ALL 11 players really stepped up to the mark from Callum in goal to defenders Cathal and Robbie (playing his first game since breaking his leg last season) and team Captain Mark Logan, midfielders Matthew, Charlie, Cillian, Phillip and Jack to Striker Evan. A deserved equaliser came after a great ball out on the wing from Robbie to Jack who took on and beat his man before unleashing an unstoppable shot in to the far corner to make all square at 2-2 with five minutes remaining, however that was to be the final score. A very good team performance where the character to come from behind twice shone through on the day. This was  lead by joint player of the game Jack O’Reagan for his goal and assist and Phillip Slewa for his non stop running despite being the subject of some very heavy tackling on him.