Carrigtwohill United U16 V Carrigaline A

Carrigtwohill United U16 V Carrigaline A

On a dull, but mild Saturday morning, Carrigtwohill United U16 hosted Carrigaline United A in their latest round of league fixtures. Carrigtwohill started brightly and took the lead on 6 mins when a perfectly weighted through ball from Adam Rooney in midfield found the run of Calvin Fitzgerald and he rounded the on rushing keeper to finish from a tight angle.

With the home side now doing all the pressing Fitzgerald came close again on 17 mins when Liam Scrivens long range effort was pushed wide by the Carrigaline keeper only for Niall Harte to cut it back to Fitzgerald who’s header was narrowly off target.

However, on 28 mins Carrigtwohill doubled their lead. Some good link up play on the right between Harte and Fitzgerald created the opening and when the cross came into the box Lorcan Walsh was on hand to turn the ball home after making up great ground from the left side of midfield. Carrigtwohill were now playing neat and tidy football and when Adam and Lorcan combined to find Calvin in space he struck a low effort from 20 yards which nestled in the bottom right corner. 3-0 at the break. 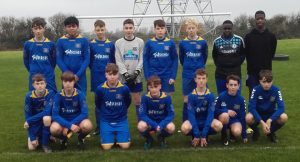 Carrigtwohill made two changes at halftime, Adam O Neill replaced Alex on the right and Eric O’Sullivan came in for Lorcan on the left. After 44 mins Ben Naughton in goal was called into action saving well from the Carrigaline forward.

On 47 mins Adam O Neill provided the cross from the right for Harte to score and on 50 mins Fitzgerald claimed his hat-trick with a cool finish after latching onto a nice through ball. Fitzgerald had his 4th and Carrigtwohill’s 6th a minute later, Harte with the assist.

The hard working Calvin was replaced by Ruben on 52mins and Ruben was straight into the action showing some nice touches. Eric O Sullivan created an opening for Harte on 54 mins and Harte finished through a crowd of Carrigaline defenders for his 2nd.

Jason replaced Harte on 55 mins. With the home side now running riot. O’Sullivan was denied from close range by a superb save from the Carrigaline keeper. When Ronan McCrave floated in a free kick from the right on 61 mins such was the panic in the Carrigaline defence that the ball was turned into their own net, 8-0.

With all the goals scored it must be mentioned that the most satisfying outcome was another clean sheet. The defence were superb again today with man of the match Jake O Brien ably assisted at centre back by Henry Keyes. 12 points from the last four games puts us in good stead with a tricky away fixture against league leaders Ballinhassig to come in a fortnight. Well done to all involved.